Contours vs. Breaklines, What’s the Difference?

Global Mapper Pro contains a host of advanced terrain editing and analysis tools, including a few options to create vector features from a digital elevation model (DEM). Contours and breaklines are both vector lines that describe a terrain surface, although their creation and application are very different. Often confused, contours connect pixels of equal elevation while breaklines trace the edges of slope and curvature defining the transition from one surface plane to another.

Contour lines, a type of isoline, connect points of the same elevation value throughout a dataset. Typically, contour lines have a set vertical interval so that their horizontal spacing reflects the local slope characteristics, and changes in elevation are shown with labeled lines on a 2D or 3D map. Created in Global Mapper, contour lines are 3D features where each line holds a single elevation value, and when followed each line will return to its starting point making a closed contour or end at the edge of the dataset.

While contours are usually represented as lines, Global Mapper’s Contour Creation tool provides the option to create iso-height areas. This setting in the contour creation dialog transforms contour lines into polygon features at their prescribed elevations, which appear as planes stacked on top of each other when rendered in the 3D Viewer.

An additional analysis process in the contour creation tool identifies local high and low points by identifying a specified number of concentric, or nested, contours. Additional parameters stipulating a required minimum distance between identified spot heights can be added, but the peaks and depressions identified are based on the contour lines generated by Global Mapper. 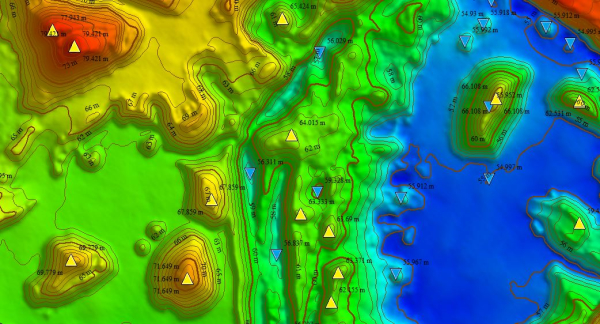 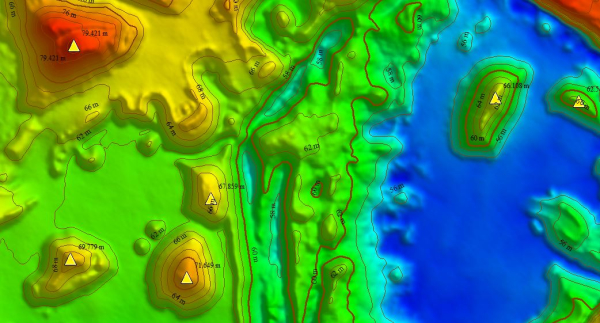 Breaklines indicate a change or break, in elevation or slope. These vector lines outline edges and changes in a terrain surface to communicate the overall shape. Breakline elevation varies from vertex to vertex and often cuts across variances in elevation.

Find Breaklines at Slope Region Boundaries analyzes slope throughout a dataset to identify the edges of flat areas based on a user input slope threshold. Any value under the entered threshold is considered a flat area in this analysis. This method works well to identify flattened areas such as areas of water and building sites.

Find Breaklines Around Edges of Regions with Similar Slopes works with a curvature value threshold to outline areas below the entered threshold value. Curvature measures the curve or deviation from a straight line at each location throughout the terrain dataset. This breakline creation method generates a standard curvature grid as a background process and uses this grid to identify closed contour lines at the threshold curvature value.

Find Breaklines at Any Surface Break generates breaklines based on the selected curvature method or slope. The Edge Detect Threshold and Edge Connect Threshold sliders determine how sensitive the breakline identification is and how identified lines along inconsistent edges are handled.

Use in Terrain Creation

In the end, both contours and breaklines can be created in Global Mapper Pro from terrain data and both describe the shape of the terrain. Contours do so by connecting equal elevation values, while breaklines analyze curvature and slope to outline or trace larger changes in the overall terrain.

If you would like to explore contour and breakline creation in Global Mapper Pro, download a 14-day free trial today! If you have any questions, please contact us.