Hydro-flattening when creating a DEM in Global Mapper

The method of hydro-flattening helps resolve issues in elevation grid creation that often arise from the fact that water is fluid and always moving and changing shape and texture. Due to this constant motion, many 3D data collection methods fail to generate suitable data representing water areas or stream channels. Common questions arise when thinking about this particular data collection and creation problem. Should the water show this irregular texture in the generated data? Will my usual data collection methods suffice? How can I show the area of a lake or pond at a consistent and even water level? Does the terrain accurately reflect the downhill flow of a stream? Thankfully, Global Mapper offers valuable features and methods for data creation and editing that can help to better represent water and other features in the resulting surface model.

Will a point cloud suffice?

Starting with data collection, a common form of raw 3D data is point cloud data. While this type of data can be collected actively with a lidar sensor or generated from passively collected images, the end result when it comes to bodies of water is the same. If the data covers some water, there will likely be holes, areas of no data, or noisy returns over the fluid area. 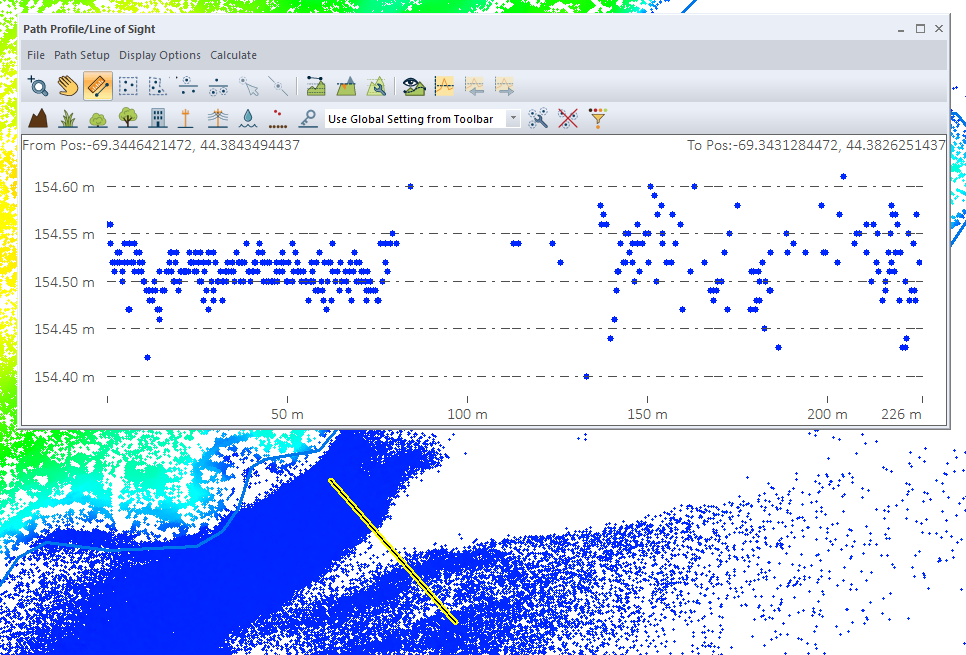 With a cross-section view of the water area in a point cloud shown, the variance in elevation can be seen. This will ultimately result in a rough terrain surface in this area.

What features can better represent water?

To best represent a flat, even area, or a sloped feature in the case of a stream or river, 3D vector features can be loaded and used to hydro-flatten local areas when creating terrain models. These area and line features are not collected in a point cloud, but they can be easily created in Global Mapper. In the best-case scenario, a public GIS data repository, such as the USGS National Hydrography Dataset, may already have data representing the features you need, but you can also digitize these features using the drawing tools in Global Mapper.

Vector features created in Global Mapper will be two-dimensional by default and will need to have an elevation or Z value added. For areas and lines, an elevation can be added to the entire feature with an attribute in the Modify Feature Info dialog or the Attribute Editor. 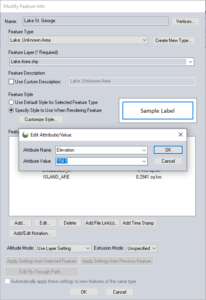 If a stream or other feature needs to be sloped or vary in elevation, this can be accomplished through the use of per-vertex elevations. Choosing to view the vertex list, elevation can then be added or changed for each vertex along the feature. Other relevant vertex editing options include options to Force Selected 3D Lines to Flow Downhill and Adjust Elevations to a Single Slope. 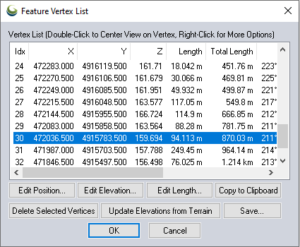 The vertices for a feature can each hold an elevation, making this feature 3D with varying elevations along the line.

Creating a terrain surface with hydro-flattening

With a point cloud describing the terrain, and 3D vector features representing the water, these layers can be combined into a single terrain grid. The Create Elevation Grid tool in Global Mapper contains a checkbox option to Use 3D Area/Line Features as Breaklines in the generation of the surface layer. This is what is commonly referred to as hydro-flattening.

First, let’s look at a generated grid using only the point cloud data. This grid has been generated using a binning method to help smooth the point cloud and considers all of the points outside and within the designated lake boundary. Looking at the result, the area of the lake can be seen, but it is not flattened to a consistent elevation, and there is some noise over the lake surface that hydro-flattening can help remove. 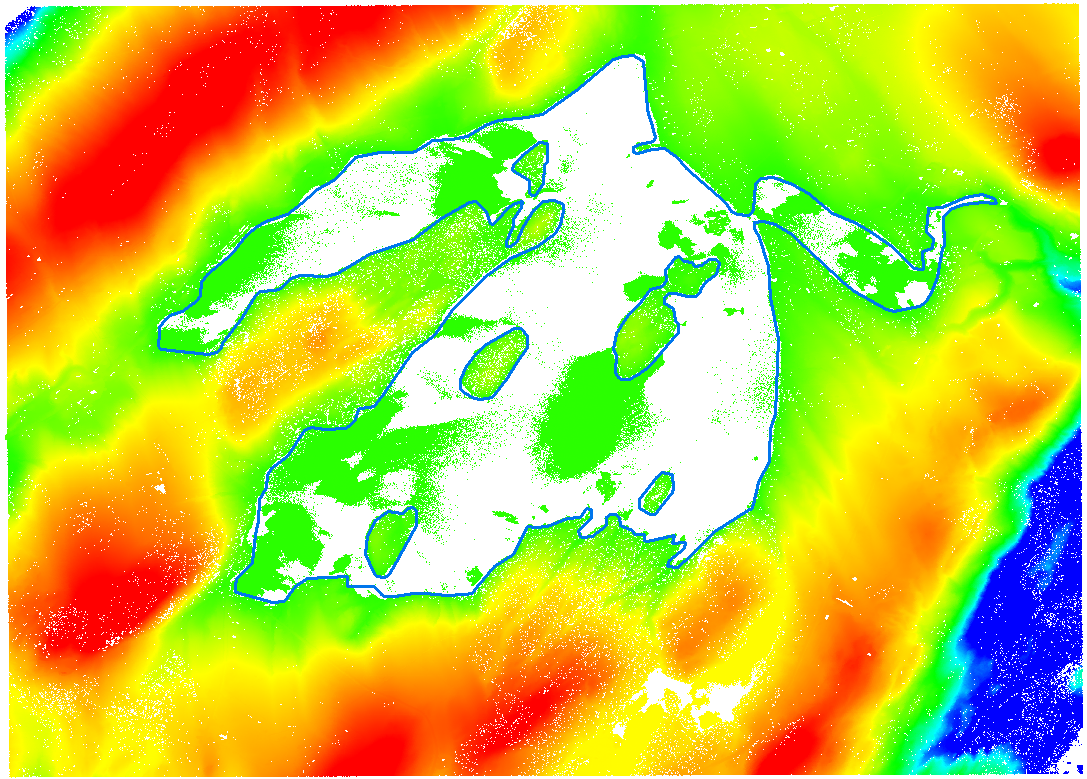 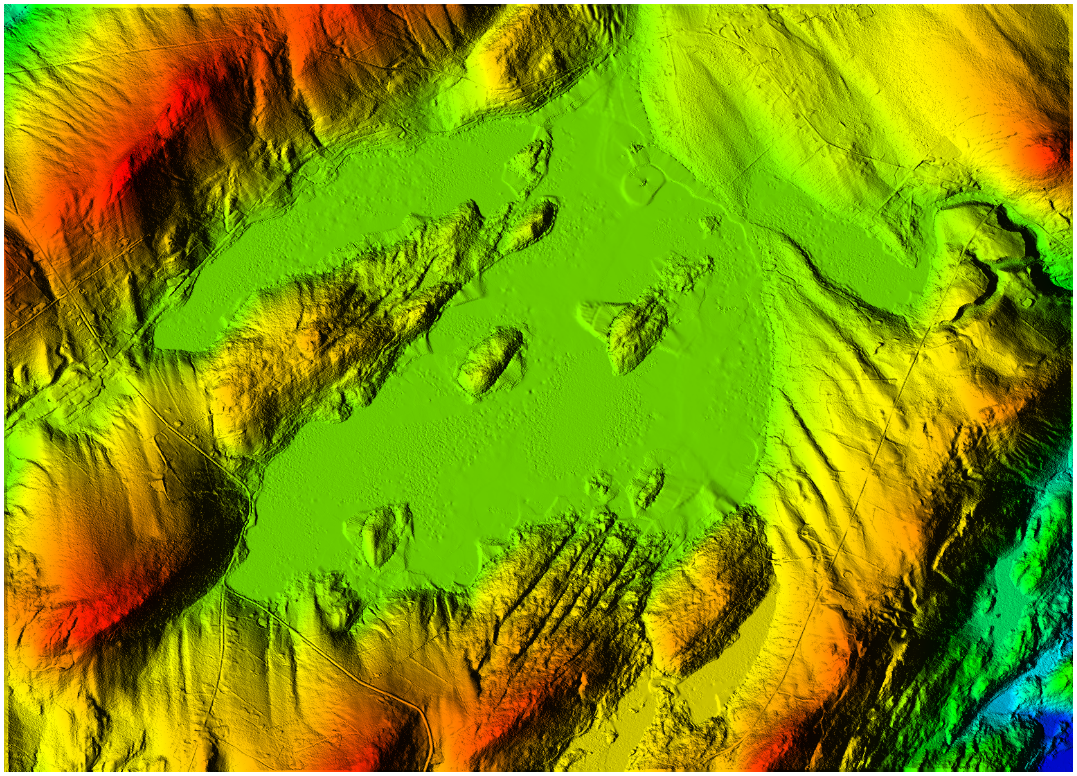 While Global Mapper can interpolate over the gaps in the data to create a gridded layer without holes, the level of noise in the point cloud over the lake area results in rough sections in the generated grid.

Taking a second look at grid creation for this area, a 3D area feature describing the lake will be used along with the point cloud data. Using both these layers of data and enabling the option to Use 3D Area/Line Features as Breaklines, the lake surface can be flattened to a specified height. The setting below the check box for breakline use determines how the flattened area is blended into the surrounding point cloud-derived surface. 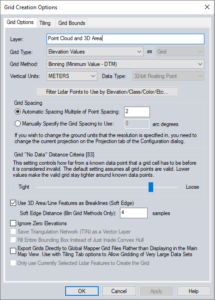 The checkbox to Use 3D Area/Line Features as Breaklines enables hydro-flattening by incorporating loaded 3D features in the creation of the gridded surface. 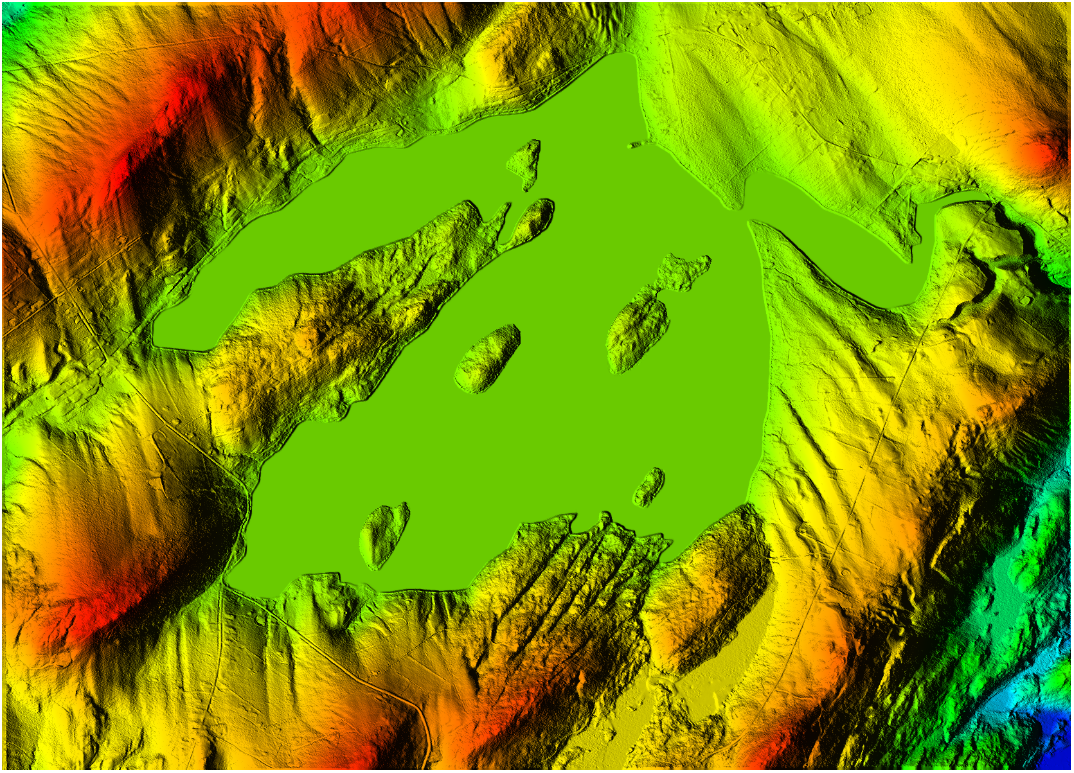 Comparing the two surfaces the hydro-flattening effect can clearly be seen. The surface generated using the 3D lake area as a breakline flattens the area of the lake to an even elevation.

Similar to using an area feature as a breakline, the same hydro-flattening or smoothing can be applied from a 3D line. In this case, a line representing a roadway has been loaded into the workspace and this line contains per-vertex elevations making it an accurate 3D representation of the road. While not hydro-flattening in the literal sense, using this feature as a breakline with the same point cloud data, the roadway is smoothed and flattened to the elevation described by the line feature. This results in a better representation of the road in the generated terrain grid. 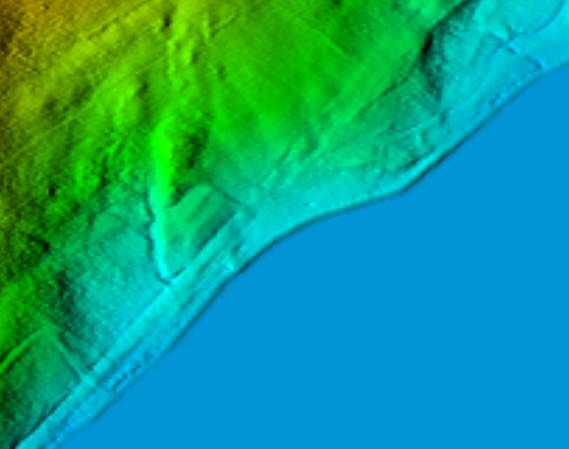 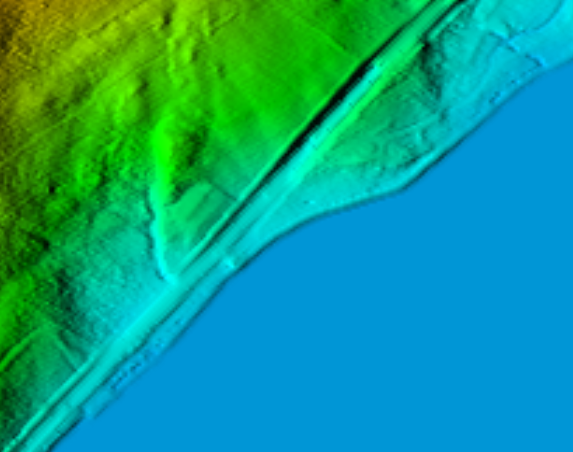 The road is flattened and clearly cut into the terrain through the use of a 3D line when generating the surface.

This cross-section view demonstrates the flattened roadway and the lake feature present in the final terrain surface.

While the use of area or lines as breaklines in the elevation grid creation process is commonly referred to as hydro-flattening, it is not exclusively used for water features. Like the road example above, breaklines can be used to flatten or cut any described feature into an elevation model being generated in Global Mapper. Using breaklines or hydro-flattening for discrete features represented in the data will lead to a more accurate surface that can subsequently be used for flow analysis, volume measurements, or a variety of other purposes.

If you would like to explore grid creation and hydro-flattening in Global Mapper, download a 14-day free trial today! If you have any questions, don’t hesitate to get in touch.