Pixel-based and multiband raster imagery is used in GIS to glean additional information about a study site and to provide context. Every pixel in a raster layer contains a wealth of data that reveal patterns in data distribution and creates a complete picture of the area of study. Three of the new features in Global Mapper 24 focus on improving and simplifying raster processing. Specifically, these methods provide a more direct way to combine multiple separate bands into one multiband image layer and new ways to adjust pixel values via histograms to improve an image’s color balancing or match it to another.

Image datasets aren’t always complete on initial download, often requiring mosaicking and color contrast adjustments. Image sets can be composed of many files from different years that do not necessarily match due to changes in camera calibration or simply because they were taken a few weeks apart and have cloud cover issues. To address these issues, colors in raster images are saved as pixel values and can be displayed as a histogram letting users visualize the range and distribution of the values present in the image. In Global Mapper, users can change the display of an image by adjusting the histogram range to increase or decrease contrast within the image.

It is common for imagery from higher-end sensors, such as satellites, to be distributed as individual bands in separate layers. Each band represents a section of the electromagnetic spectrum, such as color, infrared, or near-infrared. By default, when loaded into Global Mapper, separate band layers will display in grayscale. To see or process the image as a whole, the bands can be combined into a single image. For example, you can combine the red, green, and blue bands together to create a true color image, or create image rasters that have four or more (multi-spectral) or more than 10-15 (hyperspectral) bands.

In previous versions of Global Mapper, combining multiple bands into one single image was completed with an export, but with the ever-increasing prevalence of satellite data, this process has been streamlined.

In version 24 of Global Mapper, there is now one quick and easy tool to combine separate band layers into one file. From the Layer menu, use the Create Multi-Band Layer from Single Band Layer tool to combine all three layers into a single multiband image. Order and reorganize the bands in the tool’s dialog box to appropriately create the image, although the band display can be altered in the Rater Layer Options under Band Setup. For example, imagery collected from Landsat 8 uses bands two, three, and four as the RGB bands that can be combined to create a true color image. The number of bands contained in the new, multiband layer can be seen in the layer’s metadata accessible from the Control Center in Global Mapper.

More information on other tools and workflows for multiband imagery can be found in a previous blog, Working with Satellite Data in Global Mapper.

Raw image data often requires some adjustment to optimize visible contrast between the most frequent pixel values. Values within an image need to be represented in the RGB colorspace of the monitor, which contains values from 0-255 (one byte for each of the color bands). Values are often changed to make the image’s appearance more easily comparable, or change the color distribution to match another layer.

In Global Mapper, these values are represented graphically as a histogram for each color band present in the image. In Raster options, under the Color/Contrast Adjustment tab, you will find settings to adjust color balance options for the image. Expanding on existing tools in the software, such as Linear Percentage Stretch and Minimum/Maximum Stretch, version 24 has added the ability to apply a Linear Custom Stretch or the option to Equalize the Histogram.

The Linear (Custom Stretch) option allows users to change the specific stretch range for each band of an image by changing the maximum and minimum values based on the band histograms. For example, the below image of a town in the United States appears unnaturally green for the time of year. Adjusting the image contrast with a linear stretch method creates a more realistic representation of the earth by increasing the intensity of the red to 255, and decreasing the blue to 220. This creates a distinct enhancement of those earth-tone colors. Adjusting this histogram makes the image more usable and features more easily identifiable based on their color range. 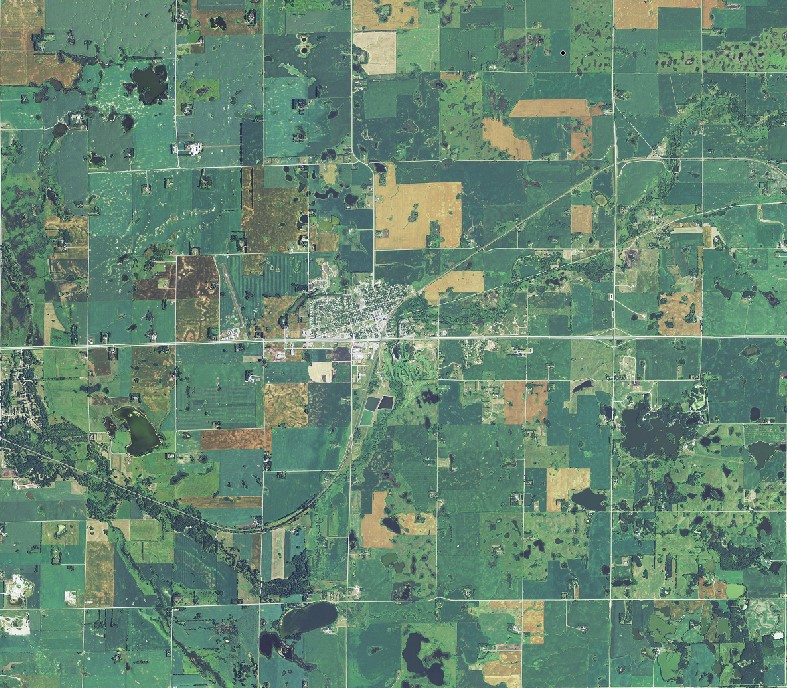 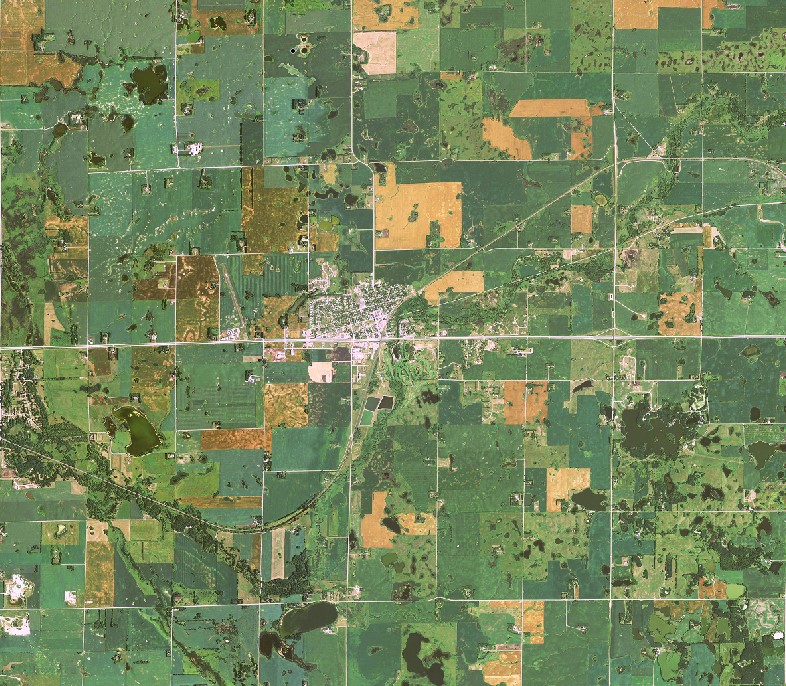 Matching color and contrast across multiple separate image files is useful for creating seamless orthoimages, performing image analysis, and many other processes that require image visualization. Even when collected with the same device, images captured at different times can be influenced by planetary changes such as sun angle, cloud cover, or changes in vegetation; therefore requiring editing. As demonstrated with the custom linear stretch image adjustment method, there are existing settings in Global Mapper that let you fine-tune the display of your image. To simplify this process for a set of images, the new Histogram Matching functionality automatically adjusts the pixel values of color bands in an image to match a single reference image.

This process is especially useful for image correction with multiple images with different color quality, such as images captured of the same area at different times. The first image below was captured in 2005, and the other in 2018. These images can be compared to measure changes in land cover, etc. To better measure these changes, the Histogram Matching tool was used to match the 2005 image to the 2018, thus limiting artificial differences between the images and restricting the analysis to changes in the landscape. 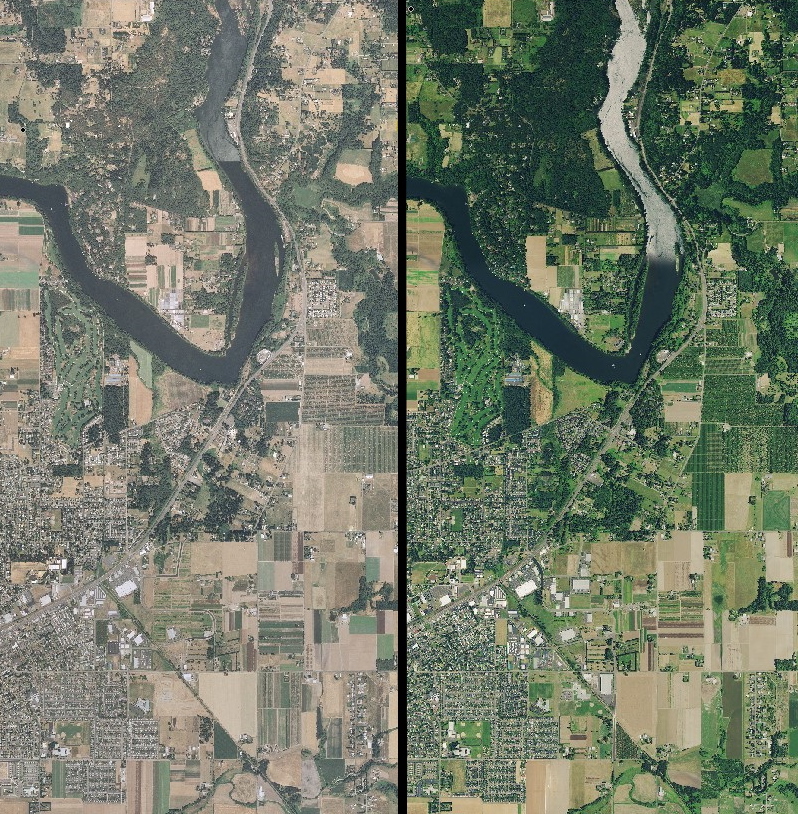 For more information on other new tools in Global Mapper v24, check out this blog.

With tools applicable to a wide range of industries and workflows, Global Mapper v24 provides extended file format support, all manner of vector feature editing tools, terrain visualization, and analysis, and much more. To check out the exciting new raster data tools and other functionality in Global Mapper, download a free 14-day trial today! If you have any questions, please contact us!