As the sun shines, it provides electromagnetic radiation to Earth, a portion of which we detect as light. Different materials, surfaces, and features reflect this energy back in different ways. The most commonly known range of electromagnetic radiation is visible light — the light our eyes detect and use to perceive the visible world around us — which falls between wavelengths of 380 to 720 nanometers. The full spectrum of electromagnetic radiation spans many wavelengths, and specific ranges of this energy cause certain effects or are used for particular purposes. For example, ultraviolet light, the light that causes sunburn, has a wavelength of 300 to 380 nanometers, while the energy used by X-rays is even shorter with a wavelength of 0.03 to 300 nanometers. Towards the other end of the spectrum, microwave radiation clocks in at about 1 millimeter to 30-centimeter wavelength.

Satellite data is created by recording the reflected and emitted electromagnetic radiation from specific ranges of wavelength. As an Earth-orbiting satellite passes over an area, advanced sensors record the energy being emitted and reflected back into space from the Earth’s surface. This data is ultimately delivered in raster format, with each pixel representing a value of varying radiation reflectance.

Satellite-collected data splits ranges of reflected energy by wavelength into separate image layers for the same scene. Each of these layers is referred to as a band, and each band can be a raster layer on its own with a single value associated with each pixel. A common source of satellite data is Landsat 8 (OLI), which uses the following band designations to distinguish the reflectance of different wavelengths of electromagnetic radiation.

Source: What Are the Best Landsat Spectral Bands for Use in My Research?

Landsat 8 and other satellite-collected data, can be downloaded from EarthExplorer, a USGS-hosted data download portal. The online data sources dialog box in Global Mapper contains a direct link to EarthExplorer in the Imagery folder. Connecting to this source will launch the USGS EarthExplorer download site in a web browser and use the current screen bounds from Global Mapper as the area of interest for the data download, making it easy to find and download satellite data for a project area.

Combining different bands data into a single multispectral layer can show additional detail for an area. Multispectral images are created in Global Mapper by loading the separate bands and exporting them  as a single multiband raster image.

To achieve a natural color image from the separate bands, combine the red, green, and blue bands during export. This results in an image that looks natural and close to how we would view the landscape in the area. 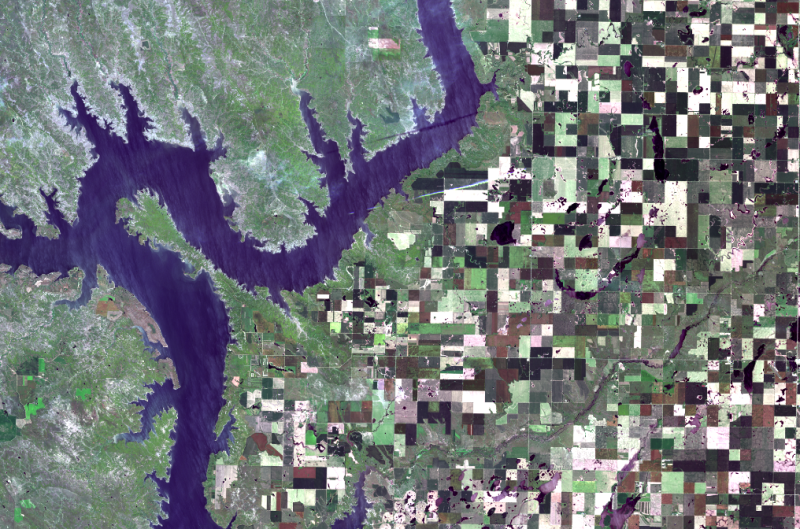 The red, green, and blue bands, bands 4,3,2 from Landsat 8 data, are combined to generate a natural color, satellite image.

Further manipulation of the bands displayed in an image can reveal specific characteristics in the scene. Stacking the near-infrared, red, and green bands creates a particular false color image often referred to as a color-infrared image. Since it is known that chlorophyll, found in healthy vegetation, reflects near-infrared light, this band combination is useful for identifying healthy vegetation. 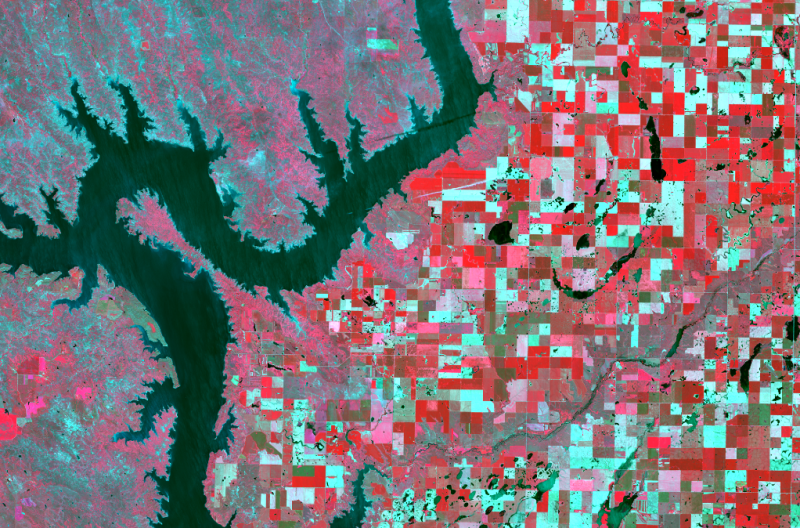 From Landsat 8 data, bands 5,4,3 are exported to generate a near-infrared image. In this result the red areas indicate healthy vegetation.

Although only three bands of data will be used to display an image, Global Mapper can export multiband data files that contain all the bands for a particular area. Exporting seven commonly used bands to a single multiband file, the band order and display can be altered and configured in the Layer Options dialog box.

The Band Setup tab offers numerous predefined band combinations for common sources of satellite data. The False Color band combination 6,5,4 can be useful for agricultural analysis as it clearly shows vegetated areas in green and barren field areas in pink and magenta. 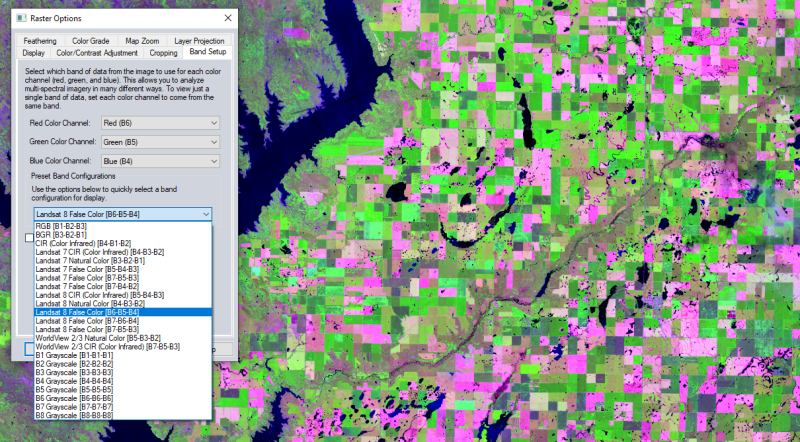 Satellite data is often collected at a lower resolution than lower altitude aerial imagery. The Landsat 8 data shown above has a spatial resolution of 30 meters, which means that every pixel represents a 30-meter by 30-meter section of the ground surface. The Landsat satellite also collects a panchromatic band of data at a 15-meter resolution that captures reflectance data for a wider range of wavelengths.

The higher resolution panchromatic band is used with the natural color image in the Pan Sharpening process to enhance the detail level and color of the multispectral image. 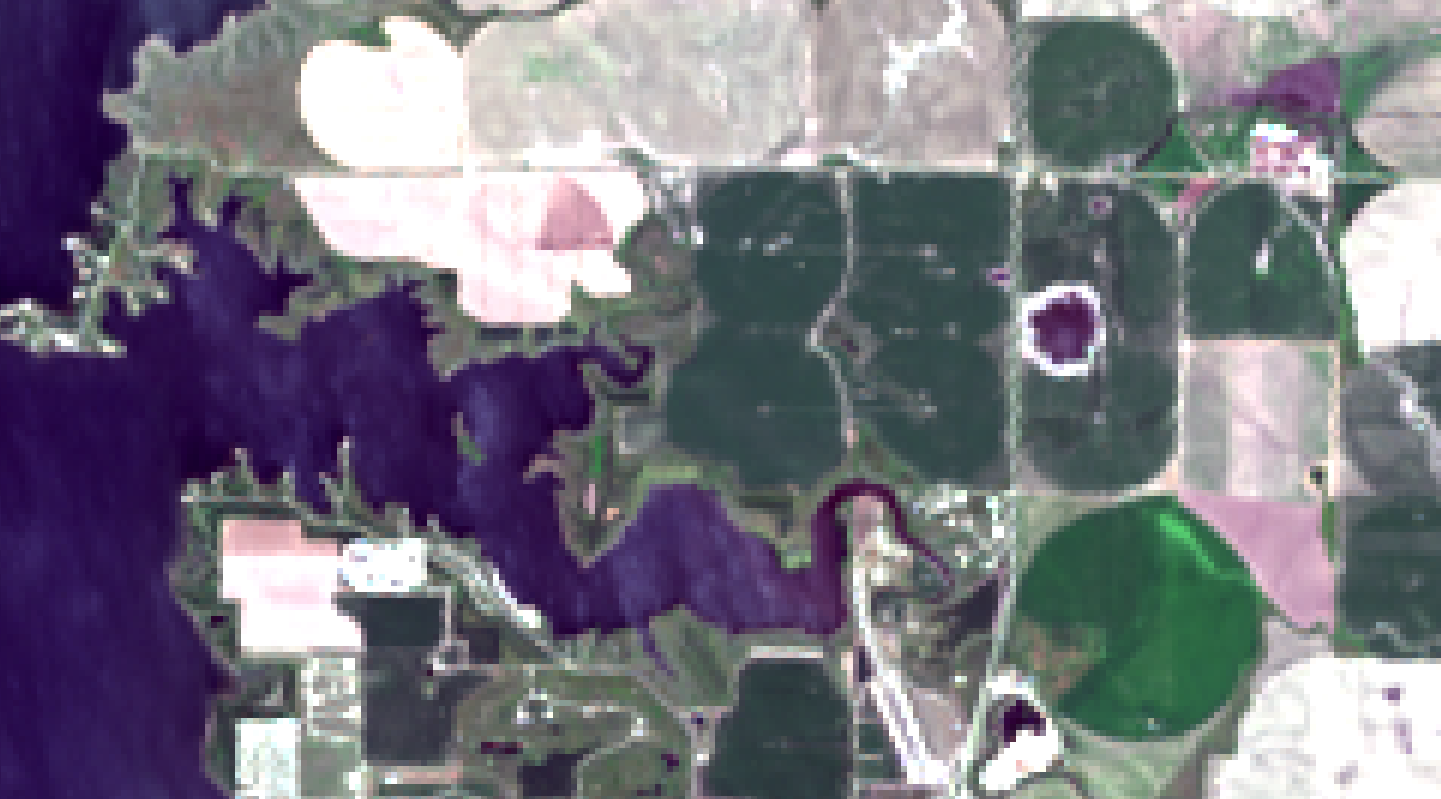 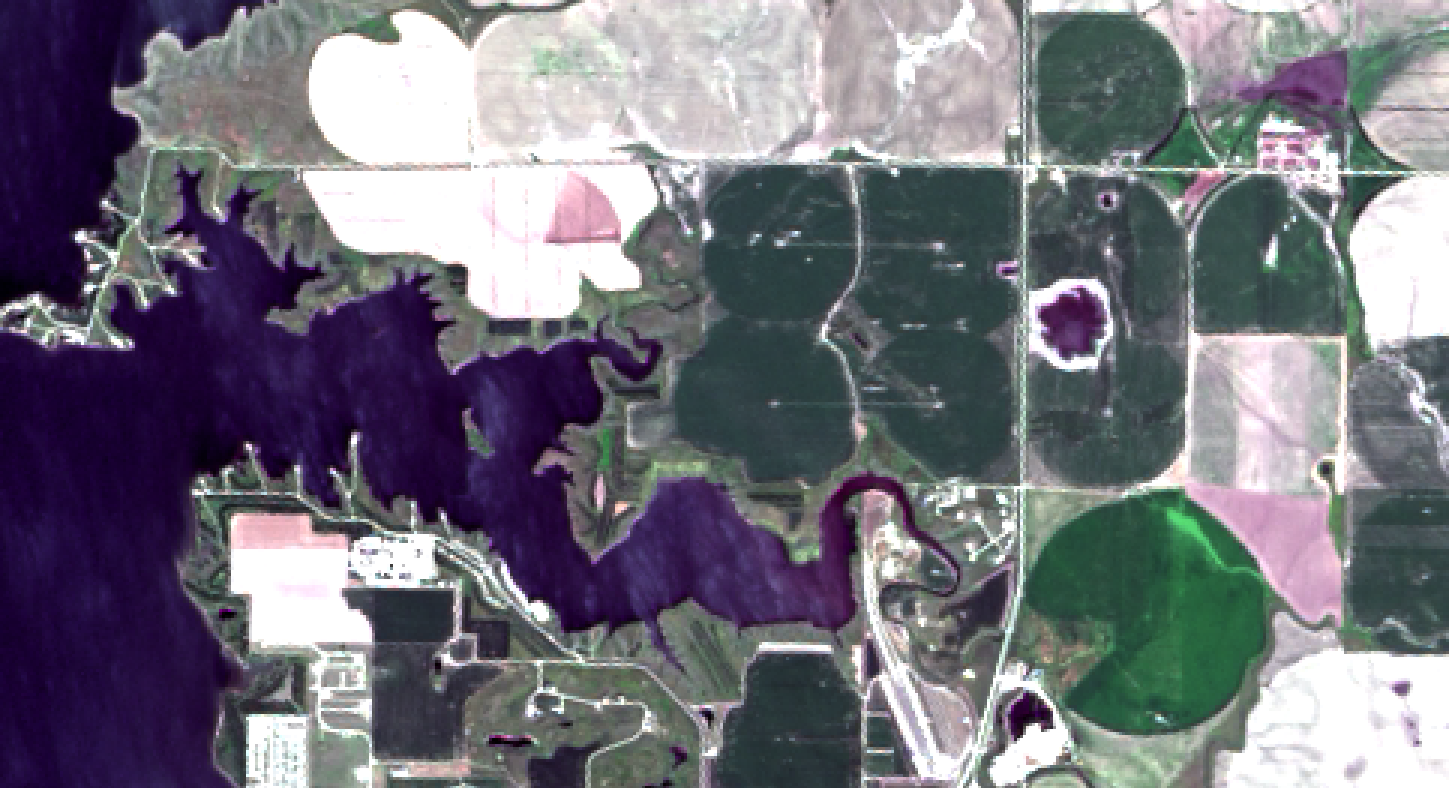 In addition to layering the band values to generate a map display that shows specific characteristics and materials depicted in the scene, the individual bands can be used in Global Mapper’s Raster Calculator to extract even more information. Since studies have shown how different surfaces and assets interact with electromagnetic radiation, formulas can be applied using the energy reflectance values from coordinating pixels from multiple bands to derive new layers of data.

The Raster Calculator  provides numerous predefined formulas for common calculations with several variations reflecting variations in the band structure of the source data. It also allows the input of custom formulas and mathematical expressions to create new raster layers.

In the following example, the green and near-infrared bands of Landsat 8 data are used to calculate the Normalized Difference Water Index (NDWI) for an area. This widely used formula detects the presence of water in the environment and is useful for monitoring and assessing fragile wetlands. 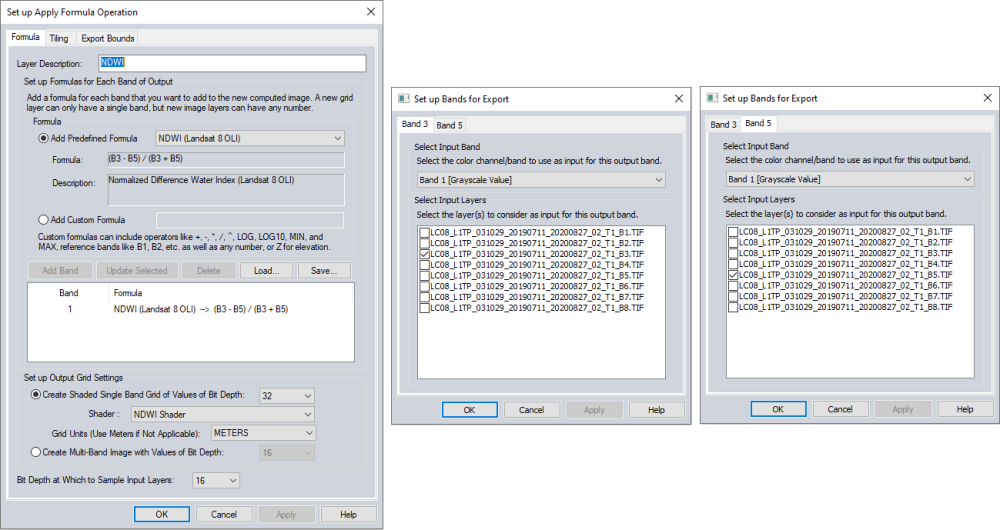 The selected Landsat 8 NDWI formula in Global Mapper correctly names these bands in the formula B3 and B5. 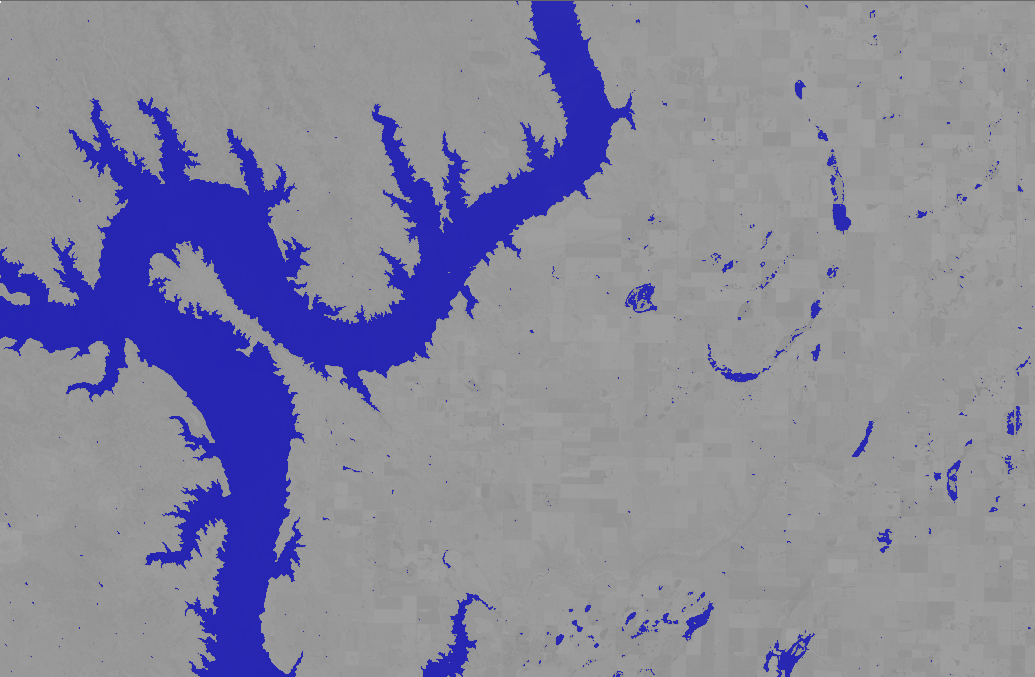 NDWI uses a scale from -1 to +1 to indicate the presence of water in the environment. Positive values, shown in blue, show the bodies of water in this scene.

Understanding how different wavelengths of light interact with and reflect off specific surfaces creates the opportunity to derive a wealth of land cover and surface type information from freely available, satellite-collected data. With this data being pixel based the layers can be used with all of the raster analysis tools Global Mapper has to offer.

If you would like to explore satellite data and other tools in Global Mapper, download a 14-day free trial today! If you have any questions, don’t hesitate to get in touch.