Any infrastructure project has basic location requirements based on the terrain and  proximity to the required resources or assets. While the raw material processed in a conventional power generation plant can be transported to the location of the plant, renewable energy methods rely on naturally occurring catalysts for energy production, making proposed locations for these systems more dependent on the surrounding environment. Hydropower requires a moving body of water, wind power requires a location with near-constant wind, and solar energy capture requires optimal sun exposure. These basic requirements can be broken down into defined standards that proposed locations for new infrastructure need to meet. The analysis tools in Global Mapper can be used to perform a suitability analysis to determine candidate locations for renewable energy farms, or any infrastructure project, based on the specific land requirements.

Suitability analysis is an assessment of the terrain and regional characteristics to find locations that meet the criteria defined for a given purpose. When considering the construction of a solar energy farm, a suitable location would be relatively flat and sun-facing. Taking a digital terrain model as the primary input data, areas that meet these solar farm requirements can be extracted as vector polygons using the tools in Global Mapper.

In Global Mapper, specific shaders can be applied to loaded elevation models to better show variation in elevation and other values derived from the terrain layer. When applied, the Slope Shader applies colors to the pixels in a terrain grid based on the calculated slope value for each cell, when compared to its neighbors. Applying this shader also allows the slope values to be used in various analysis tools such as raster reclassification. 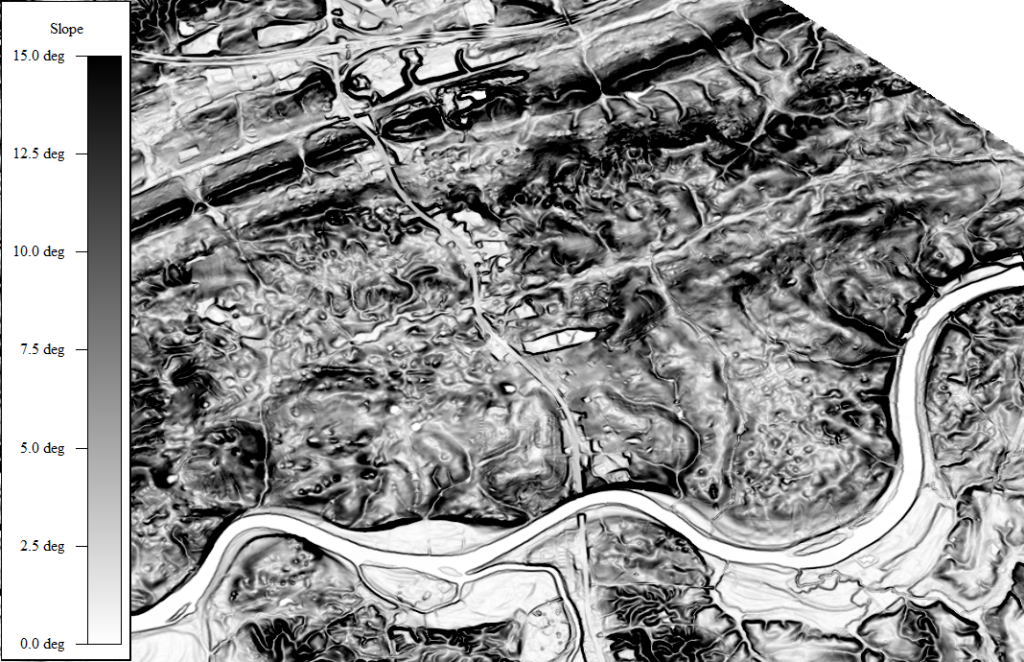 Using the Raster Reclassify tool, the slope values from the terrain model can be use to create a simple image layer to differentiate flatter areas, with a slope of 0 to 5 degrees, from areas of steeper terrain. 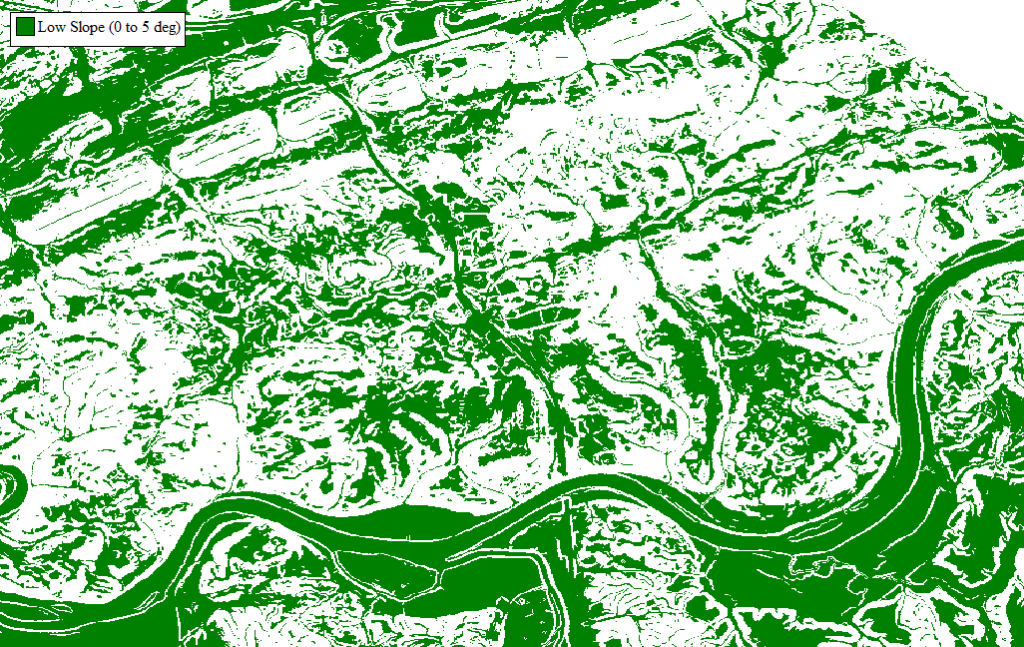 Another shader option that can be applied to the same terrain layer is the Slope Direction Shader, which shows the orientation or aspect of the slope. With this shader applied, the Raster Reclassify tool can be used to, this time, identify areas within a defined range of slope directions. In this case, the area being analyzed is in the northern hemisphere, so to identify southern facing slopes, the values between 150 to 210 degrees are captured. 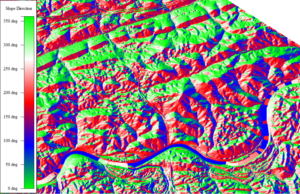 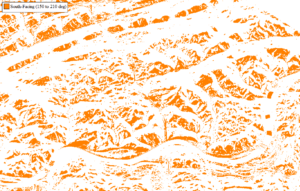 The above two steps created raster layers identifying the ideal slope and aspect for a solar farm, however,  suitable project sites need to include both of the identified characteristics. Since the generated layers have a pixel value of 1 where the slope or aspect is ideal, and 0 where it is not, the Raster Calculator can be used to apply a simple formula to combine the two generated raster layers. Multiplying the values from the corresponding pixels in each of the overlapping layers, created a new raster layer with the value of 1 representing areas with both ideal slope and aspect. If the criteria are of varying importance, values other than 1 could also be used in the Raster Reclassification process as weights and the layers could then be added together to provide a suitability score for the resulting areas.

To bring these identified areas into the vector world, the Create Areas from Equal Values tool is used to bound the areas of a specific value, creating polygons from the calculated raster layer. 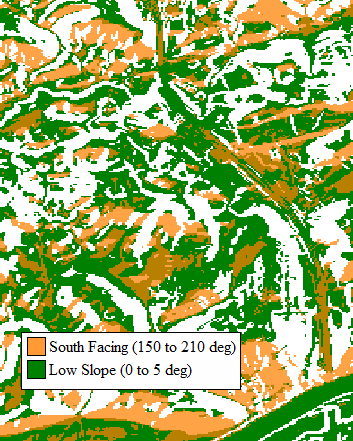 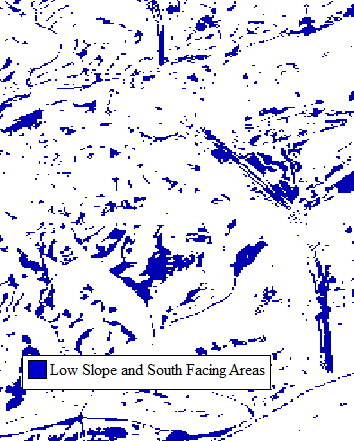 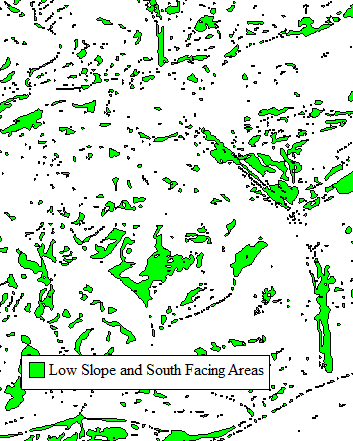 From multiplying the Slope and Slope Direction raster layers together, to extracting areas of equal values, to finally smoothing the extracted vector features, the result is a single polygon layer showing all low-slope, south-facing areas within the region of interest.

Taking the analysis a step further, the proximity to existing infrastructure can be considered in the site suitability analysis. In order to feed the captured and converted energy into the power grid, publicly implemented photovoltaic solar farms need to be located near existing transmission lines. A threshold distance from the powerlines is defined by the creation of buffer areas derived from the vector features representing the powerlines. 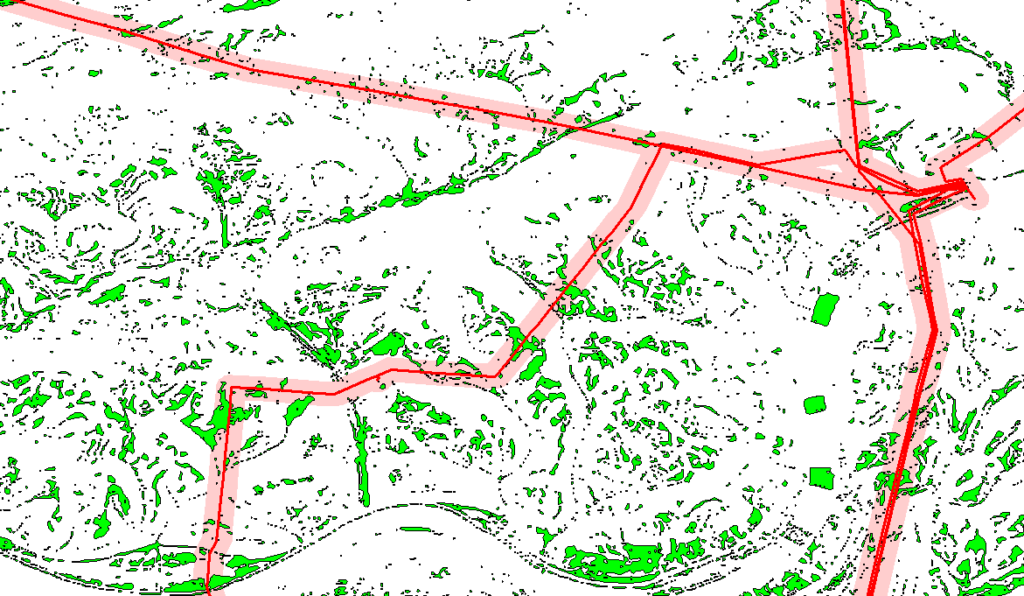 The red lines representing transmission lines are buffered to create the shaded red areas that will be used in the spatial operations tool.

The Intersect function of the Spatial Operations tool in Global Mapper can be used to identify locations with the required slope and aspect values that lie within the specified distance from existing powerlines. Using the scripting method in the Spatial Operations tool, the previously created vector layer of identified low-slope and south-facing areas can be filtered by size to create a subset of features large enough for the project. Intersecting this defined subset of features with the buffered powerline areas creates a new layer containing only the larger areas within the buffer distance of a major powerline. 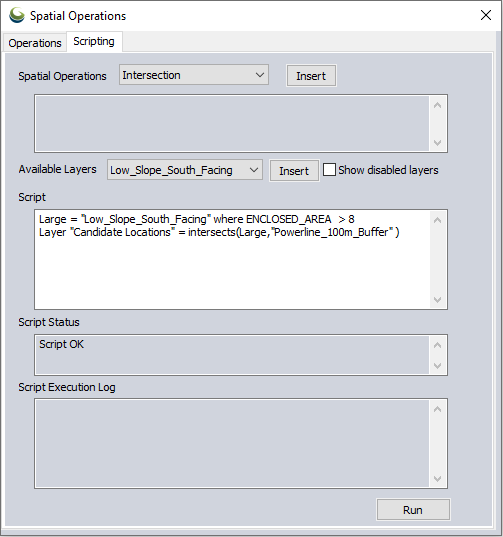 The scripting method in the Spatial Operations tool allows for more advanced filtering and function. 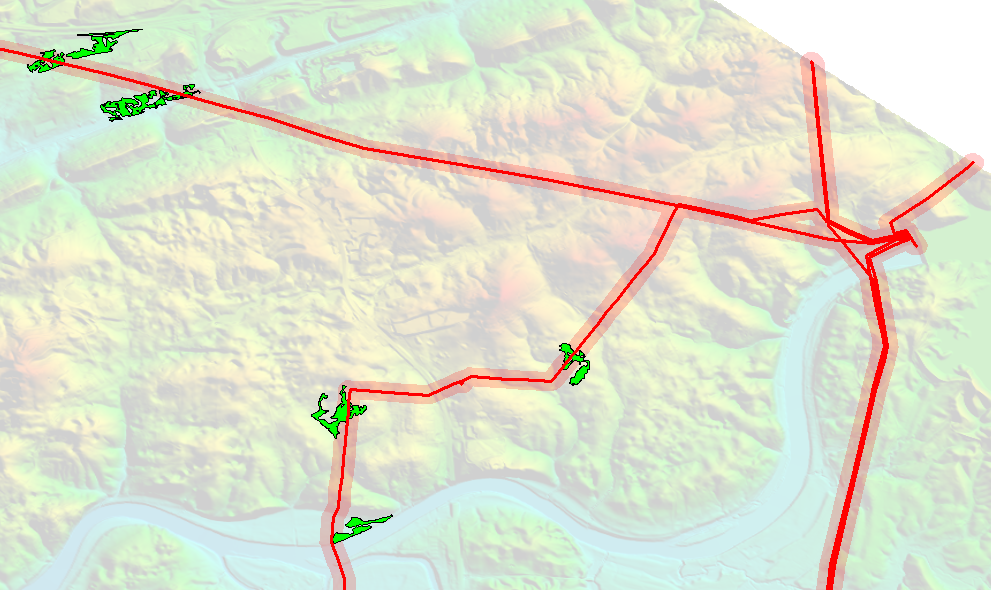 With the tools in Global Mapper, a terrain grid, and a simple vector layer containing transmission lines, areas that meet the basic requirements for a proposed solar energy farm were identified and extracted. These candidate locations for solar development are now contained in a single layer of vector features within a Global Mapper workspace. Attributes can be added, the features can be exported to any vector format, and the data can even be transferred  to Global Mapper Mobile allowing  field personnel to conduct site visits to gather additional information.

If you would like to complete your own suitability analysis or explore the other tools Global Mapper has to offer, download a 14-day free trial today! If you have any questions, don’t hesitate to get in touch.