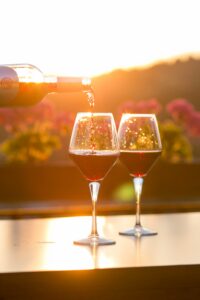 Bordeaux, Champagne, Rioja, and Napa Valley, to name just a few, are world-famous for the production of fine wine. Not only is the industry of winemaking well established in these and many other parts of the world, but the land and soil in these areas are ideally suited for viticulture. The variables and components of the terrain and climate important for viticulture can be analyzed in Global Mapper to help determine the best locations for a vineyard.

When researching a potential new location for a vineyard, whether it be a backyard plot or a new commercial vineyard, the terrain characteristics, soil type, and temperature need to be considered in a suitability analysis. Growing vines for fruit production consistently and in abundance can prove more challenging than one would expect. There cannot be too much shade or too much harsh sun thus a hillside facing in a specific direction can help to increase drainage and mitigate frost risk.

While there are a seemingly infinite number of variables that can be considered for a vineyard location suitability analysis, terrain characteristics relating to slope, general climate, and soil properties will be analyzed for an initial suitability assessment. 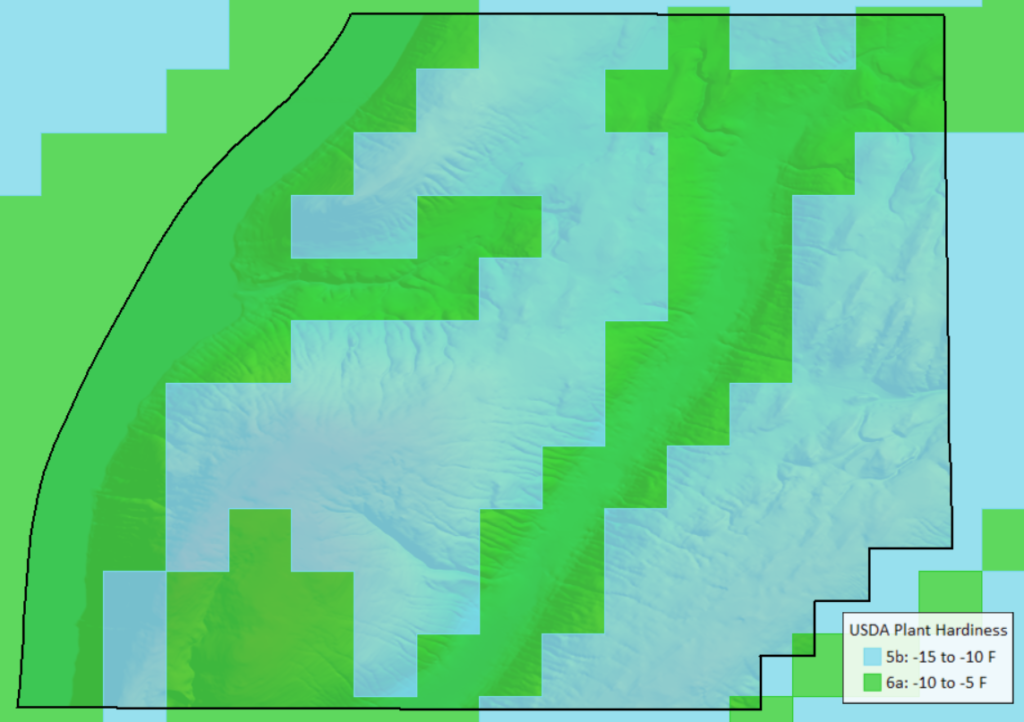 Since the Plant Hardiness Zones in this area can all support viticulture, this variable will not need to be further analyzed to narrow down the possible vineyard locations.

Within the US, plant hardiness zones, defined by the United States Department of Agriculture (USDA), classify geographic areas based on average annual minimum temperature. Plants are commonly classified by hardiness zones to determine which regions have a climate that can support a specific plant.

Wine grapes are typically cultivated in zones five through ten, with certain varieties more suited to specific zones. These zones describe a wide range of growing climates with average annual minimum temperatures ranging from -20 to 40 degrees Fahrenheit. In the following example, the broad area for a proposed vineyard is located in upstate New York, where plant hardiness zones 5b and 6a cover the area of interest. Both of these zones are on the edge of the range for supporting traditional grape varieties, but hybrid varieties, engineered for increased cold hardiness, are more suited to this region of the northeastern United States.

Grapes for wine production are traditionally grown on hillsides. This practice is not just for the aesthetic of a quaint hillside vineyard, but a moderate slope helps improve natural soil drainage, provide airflow, and increase sun exposure. Increased drainage, provided by a sloped surface, helps mitigate standing water or overly saturated soil that can stunt the growth of vines and inhibit the production of fruit. Just as water in soil flows down sloped terrain, cold air similarly sinks to the bottom of a hillside. This helps pull cold air away from the vines increasing the frost resistance to help lengthen the growing season. This is particularly important in climates with a shorter cultivation season, such as this study area in the northeastern United States.

The slope of the region of interest can be analyzed in Global Mapper using a raster terrain layer. Applying different shaders, in this case, the Slope Shader makes the slope values derived from the terrain grid available for analysis.

Using the Raster Reclassification tool, the values from the terrain surface can be classified based on entered rules. The slope values for the proposed vineyard locations are classified into three suitable categories: nearly flat (0 to 1 degrees), low slope (1 to 3 degrees), and ideal slope (3 to 6 degrees). 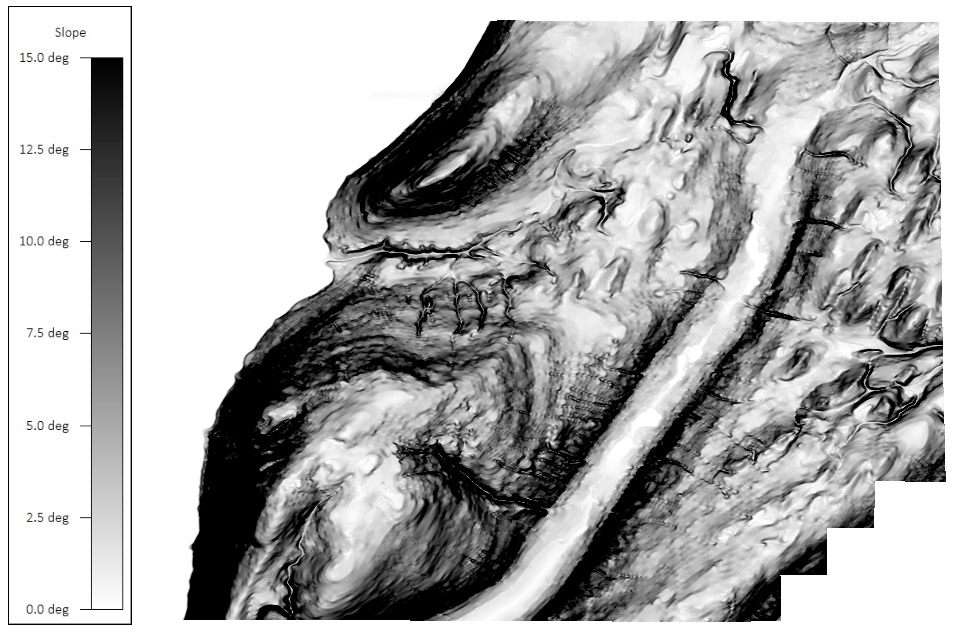 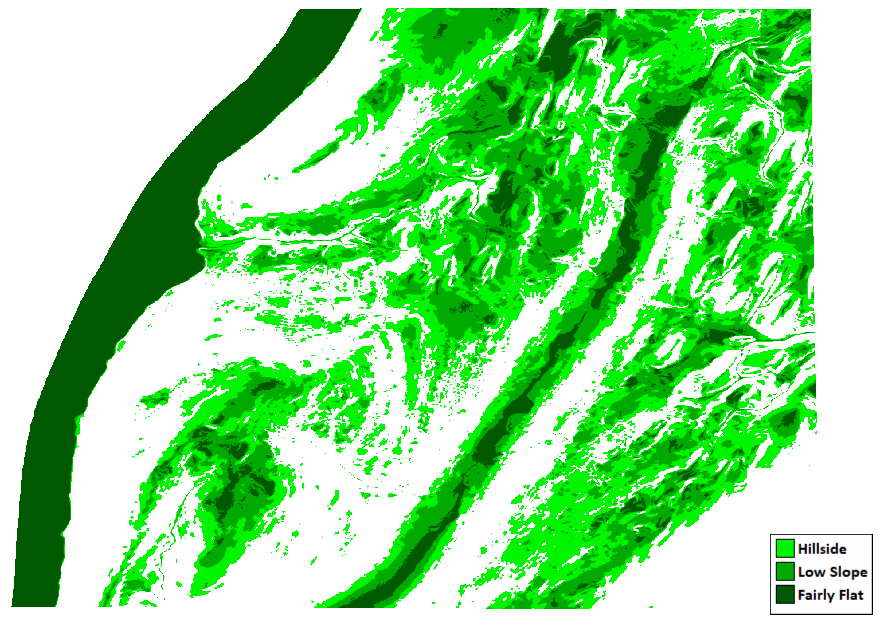 The Slope Shader depicts the cells in the elevation grid based on the calculated slope values determined by comparing each pixel to the surrounding cells. With this shader applied, the layer can be classified based on the slope values.

Aspect, the direction a slope is facing, goes hand in hand with slope since every slope faces a specific direction. In the northern hemisphere, south-facing slopes receive the most sunlight, and while vines do need direct sun, too much may burn them or overheat the plants, which can be detrimental to fruit development. For this reason, directly southern facing slopes are usable, but southeast and southwest facing slopes are considered ideal. The preference between these two aspects depends on the climate and the variety of grapes being grown. Southwest-facing slopes are typically warmer as they garner afternoon sun, while southeast-facing slopes receive morning sun that will quickly dry the dew from the vines, reducing the likelihood of mildew growth.

Using the same terrain layer, the Slope Direction Shader is applied and the Raster Reclassification tool is used to identify areas with a specific aspect. These are then ranked – southeast as best, then southwest, and finally south – in the generated layer. Each color in the resulting image represents one of the defined slope direction classes. 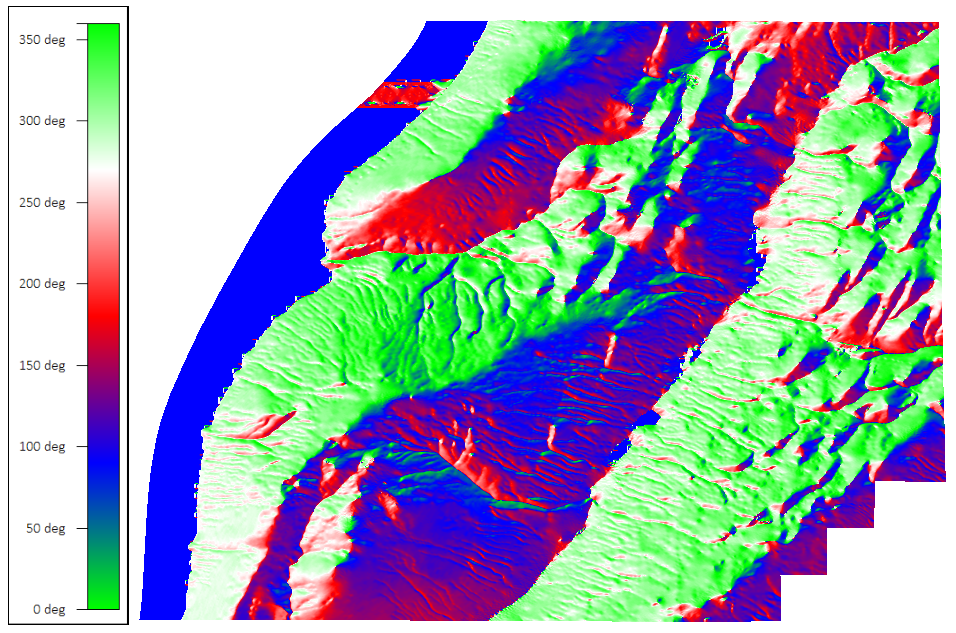 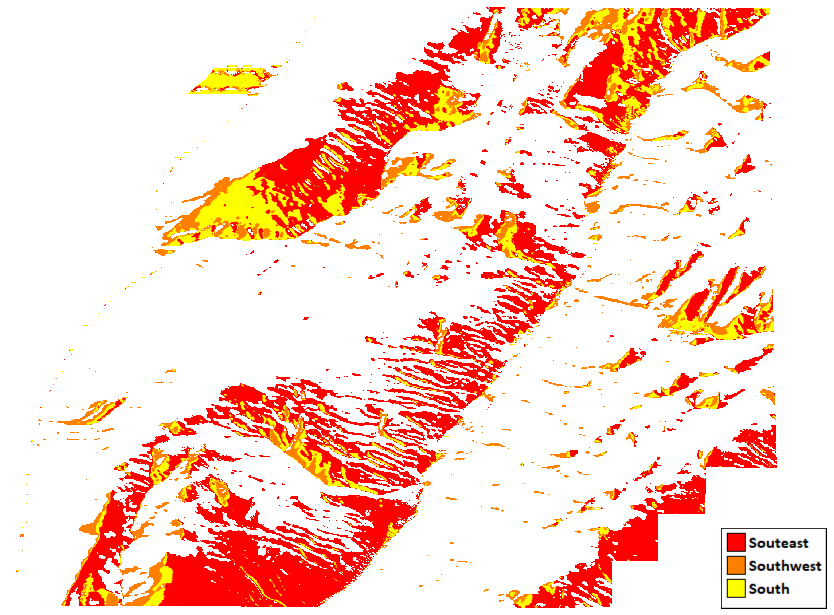 Applying another shader, the Slope Direction Shader, the same tools can be used to classify the slope direction, or aspect, values present in the terrain grid.

To bring these layers ranking slope and slope direction together, a custom formula in the Raster Calculator is applied to corresponding pixels from the classified slope and aspect layers to yield a suitability score. 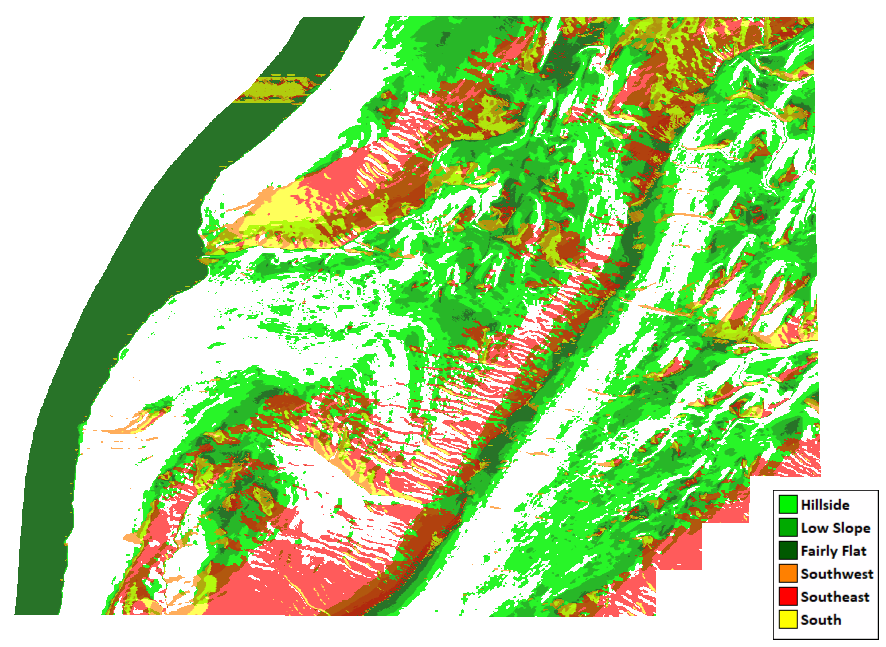 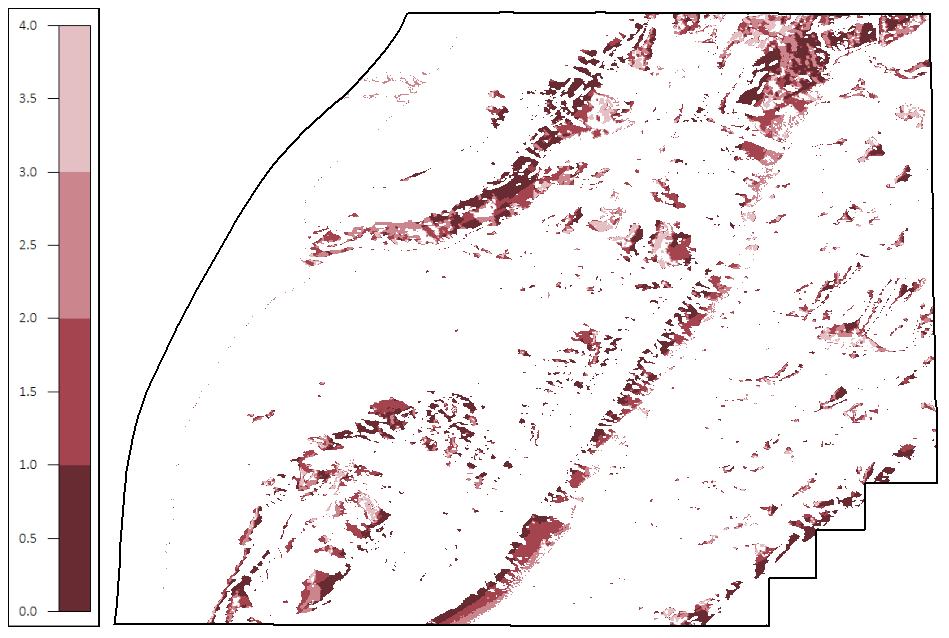 To bring these layers ranking slope and slope direction together, a custom formula in the Raster Calculator is applied to corresponding pixels from the classified slope and aspect layers to yield a suitability score. 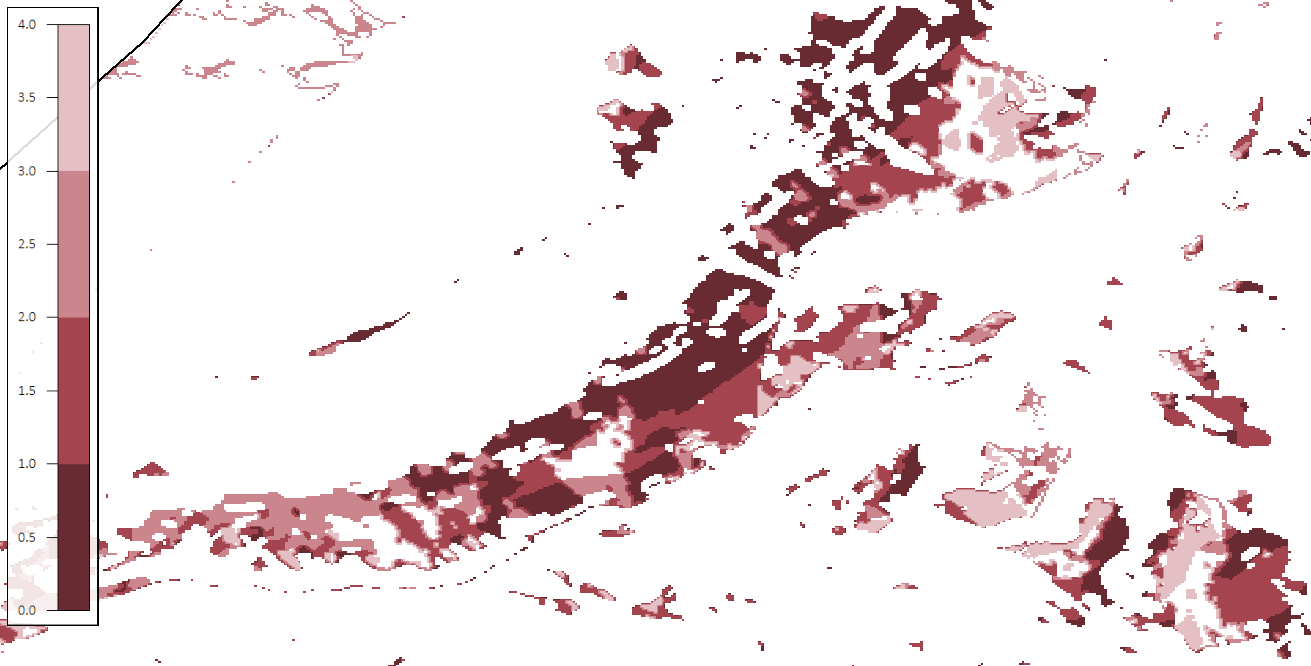 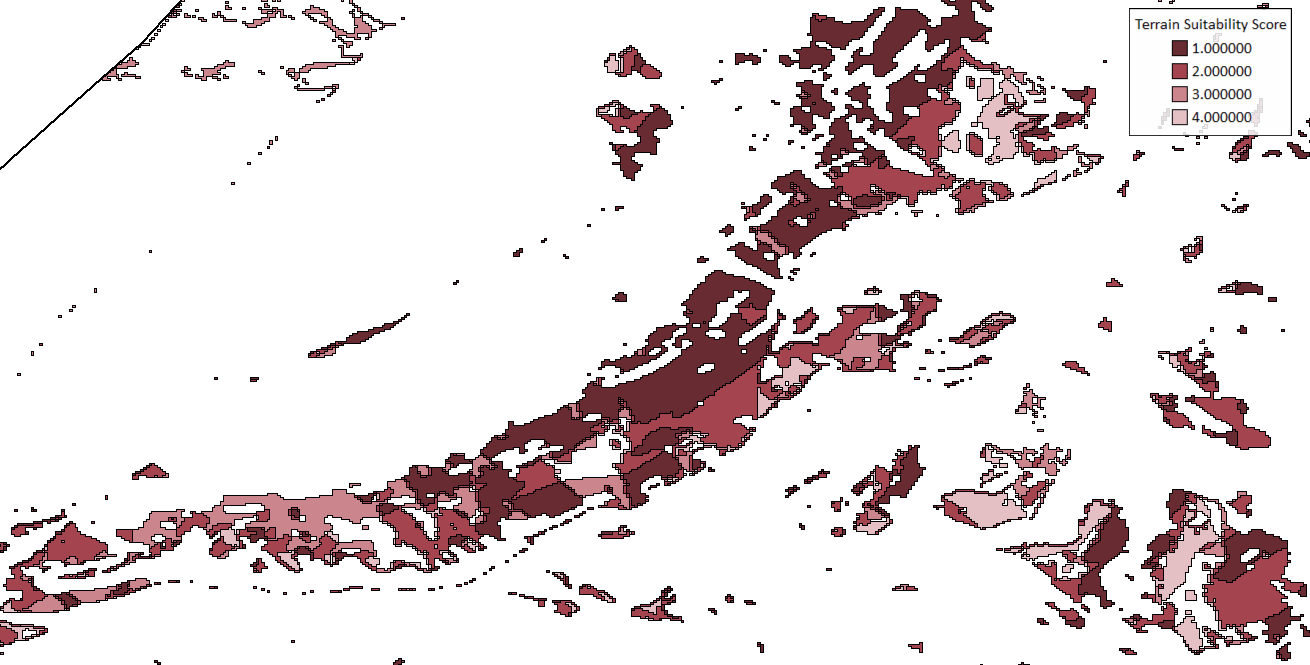 Moving from raster to vector data allows the suitable areas to be measured, have attributes added, and be combined with other vector layers in the workspace. 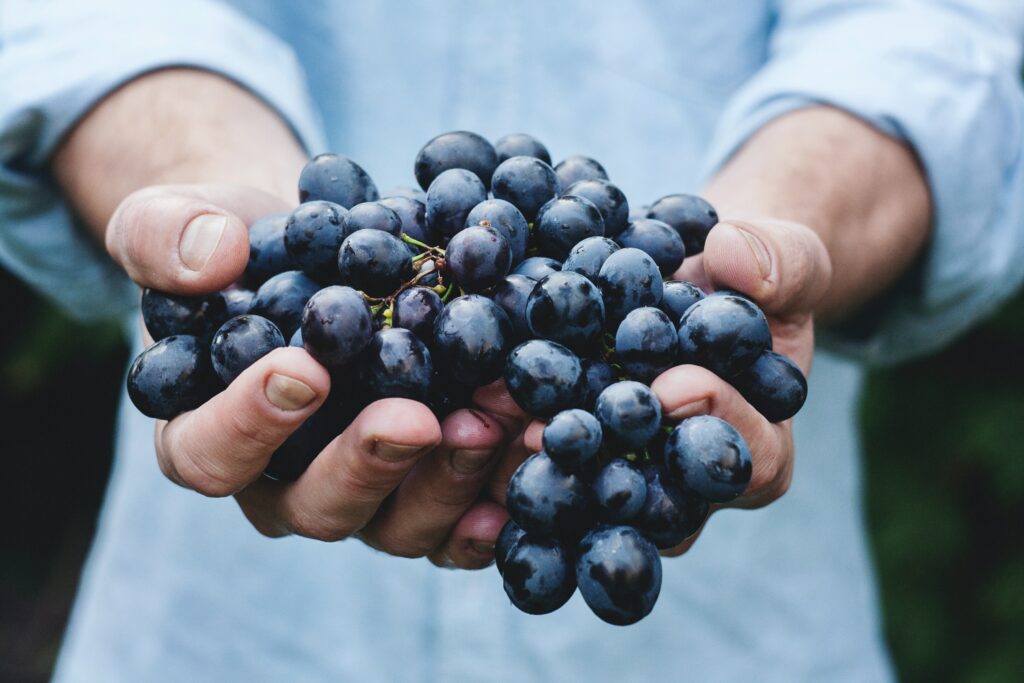 The general content of the soil and its physical soil properties may help provide better heat retention or drainage for agriculture. While very fertile soil containing organic matter, or humus, is desirable for many crops, soil for wine grape production should be relatively poor. Overly fertile soil can cause the vines to overgrow and limit the fruit production. The following four types of soil are commonly found in vineyards. 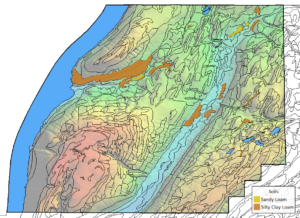 From a county-wide soil map, the suitable sandy loam and silty clay loam soil combinations can be easily identified and placed in their own layer.

With the general soil types described as above, it is important to note that soil is typically not composed of a single texture or type. Sandy loam soils and silty clay loam soils are often desired for grape cultivation.

Reports from the USGS Soils data describe the general composition for each soil type. Taking these values as attributes connected to the spatial polygons, suitable soil areas can be identified.

USGS Soils data describes the general composition for each soil type. Taking these values as attributes applied to the polygons, suitable soil areas can be identified.

Global Mapper’s Spatial Operations tool is used with the intersection operation to combine the identified soil areas with analyzed terrain areas. This action creates a new layer containing only the polygons that have a suitable slope and aspect, and a desired soil type. The new set of features inherits the attributes from the analyzed terrain layer meaning the calculated terrain suitability score is retained for each new area feature. 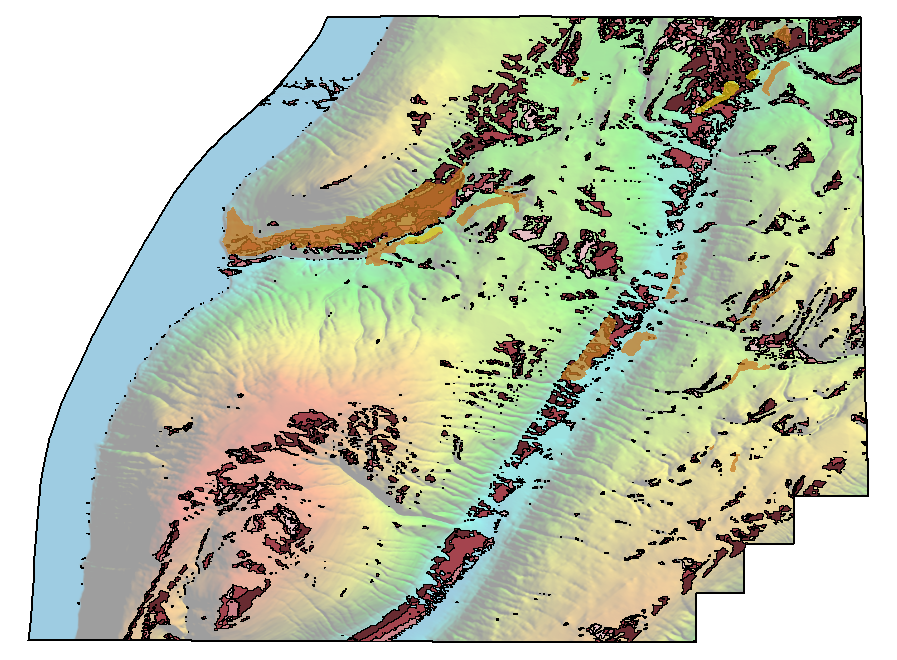 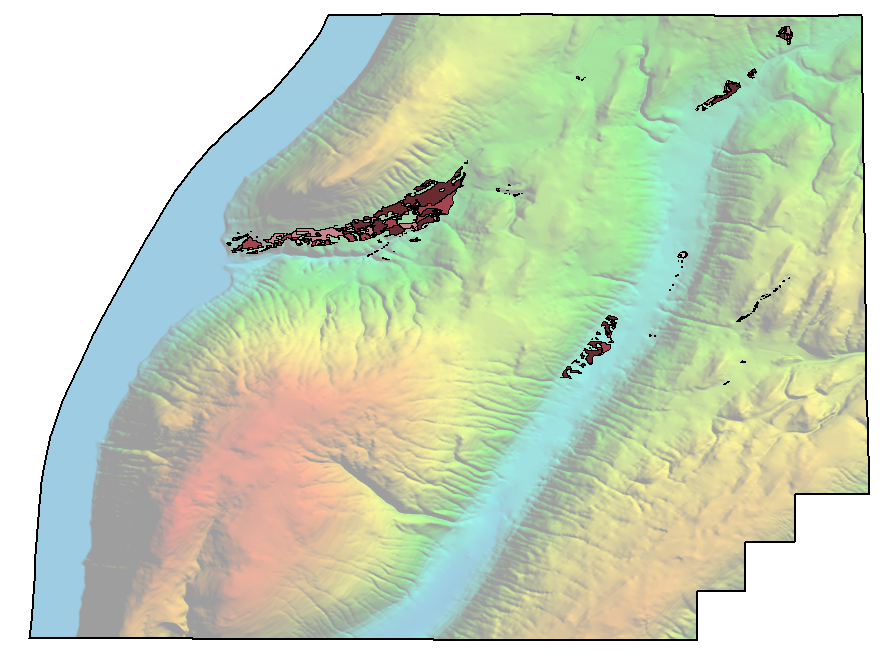 The Spatial Operations tool creates a new layer containing only the areas where the identified soil area and terrain area intersect.

A vineyard needs to be of a sizeable acreage, and, to this point, the area measurement of a suitable location has not been considered. Using a digitizer option in Global Mapper, area measurements, including 3D surface area derived from the loaded terrain grid, are added to each feature as attributes. This new set of attributes can then be queried or used as a filter to further narrow down the identified areas based on acreage. Depending on the size and production goals of the vineyard, 5 acres may be sufficient, but for a commercial vineyard at least ten, likely more, is required. 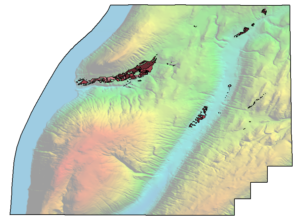 The suitable vineyard locations for both small and large operations are identified and styled with the terrain and water features for the area.

In the process of generating polygons describing suitable small and large vineyard locations, data from both raster and vector format sources have been incorporated. Through the workflow attributes such as a terrain suitability score have been added, and more recently, through the surface area measurement process, key slope and aspect values were added to the suitable areas as attributes. 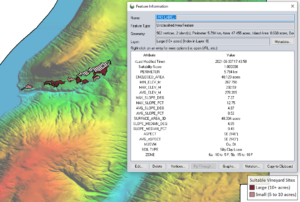 The attributes attached to each suitable vineyard area will be saved with the project and retained if the polygons are exported. These features and attributes can be further edited and analyzed as needed.

To capture all considered factors as attributes in the generated suitable area polygons, the soil types and USDA Hardiness Zones can be easily copied from one set of features to another based on spatial overlap. This attribute editing attaches all the relevant information considered in the suitability analysis to each final area feature. This information describing the characteristics of each area can then be clearly displayed or referenced as needed from a single layer.

Global Mapper provides an innovative way for professionals involved in agriculture and other industries to perform a terrain suitability analysis for a variety of use cases. A few freely available data layers were used to identify areas suitable for vineyard development. Of course, not all site selection criteria can be analyzed in a GIS program. Site visits, advanced soil sampling, planning, and infrastructure implementation are all needed before beginning grape cultivation. The areas identified by this suitability analysis are now vector features with attributes describing slope, aspect, area, and soil type that can be further edited, exported, or taken into the field for further site exploration. 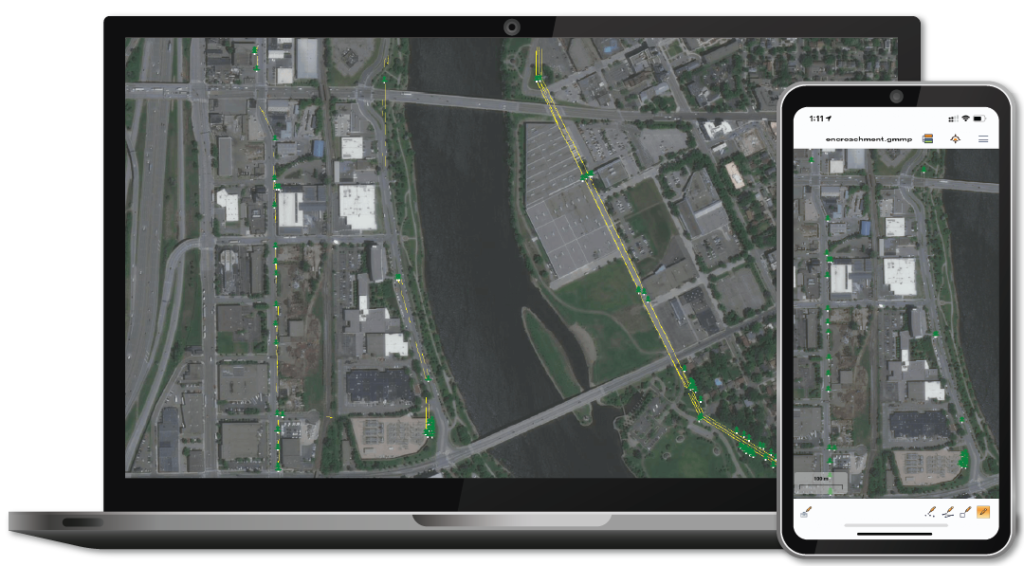