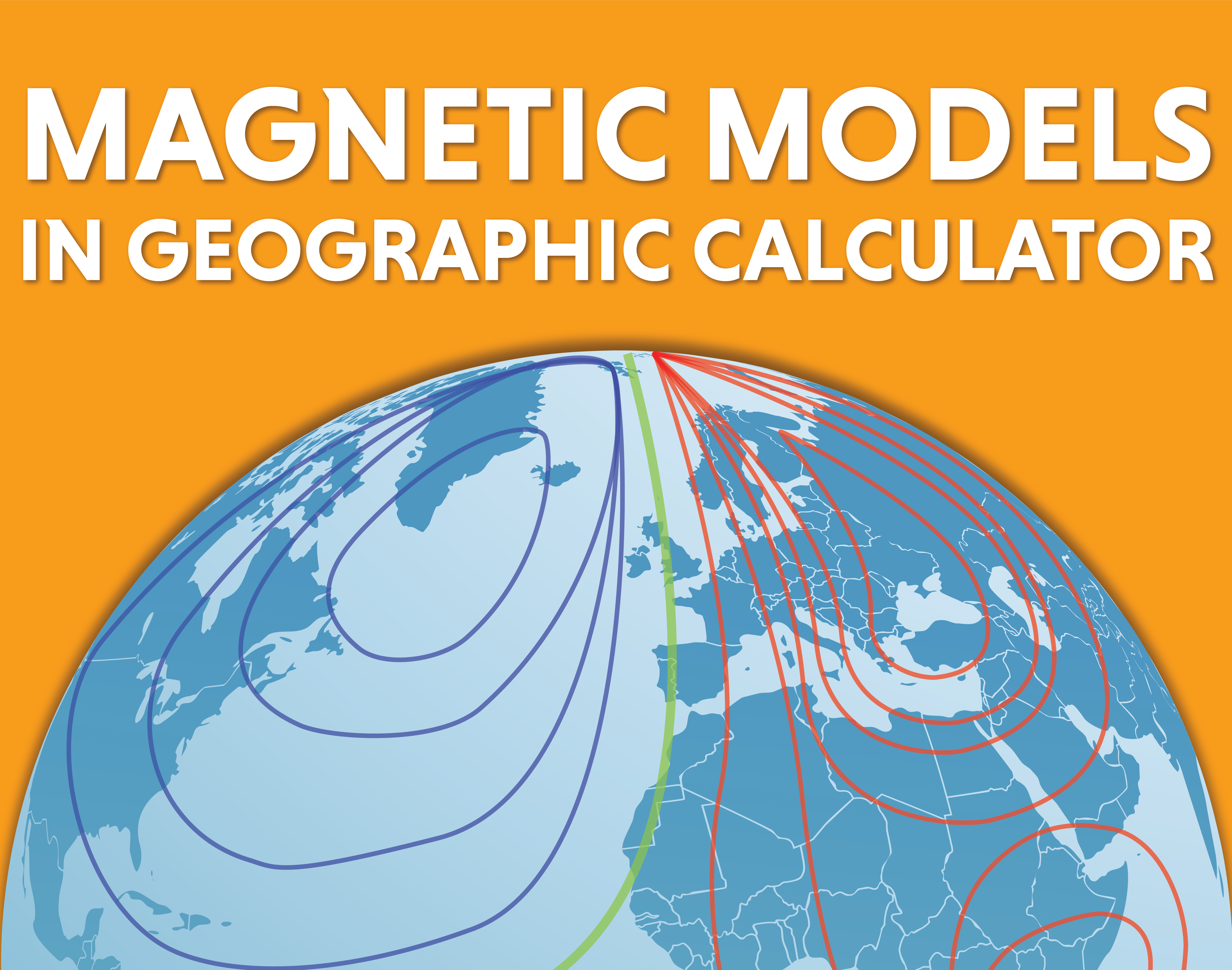 One of the less well-known components of Geographic Calculator is in the calculation of magnetic declination. Built into Geographic Calculator are seven geomagnetic models that span the entire Earth.  Magnetic declination is the difference in a magnetic compass reading and true north. The models included are broken into three distinct groups: The International Geomagnetic Reference Frame, the World Magnetic Model, and an interesting historical model known as “GUFM1”.  There are models for IGRF 11, 12, and 13, and World Magnetic Model 2010, 2015, and 2020. If you have no idea what I’m talking about you’ll need to open up Geographic Calculator and take a look under options in the general preferences. Magnetic models are disabled by default but can be switched on with a simple checkbox.

The reason to have these magnetic models in place is to augment headings when calculating pathways between points for navigation.  For users that need to calculate things like distance and direction between points along with particular headings, you need to have a very precise idea of where your north reference is in the real world. Many folks are familiar with the fact that there are two kinds of north that we use in mapping, true north, and grid north. True north is the North Pole; that one is fairly conceptually easy. Grid north gets involved when we work with a projected map or map on flat paper. Grid north is simply up on just about any map towards the top of the page. Whenever we’re taking measurements from a map, the grid north is what we are actually measuring from. Just to really confuse things, some maps have True north and grid north together and some don’t, it all depends on the projection.  Conceptually, true north is what most people think of as north in casual conversation. Magnetic north is frequently what we measure from in the real world when we’re actually navigating. Modern GPS instrumentation relies mostly on true north but some units also have magnetic sensors in them that measure direction from that. Navigationally, the consequences for using the wrong reference can be significant depending on where you are on the planet.  In fact, if you’re on the Meridian between the magnetic pole and the North Pole, the magnetic north will be due south!  So it’s important to know how you’re measuring! 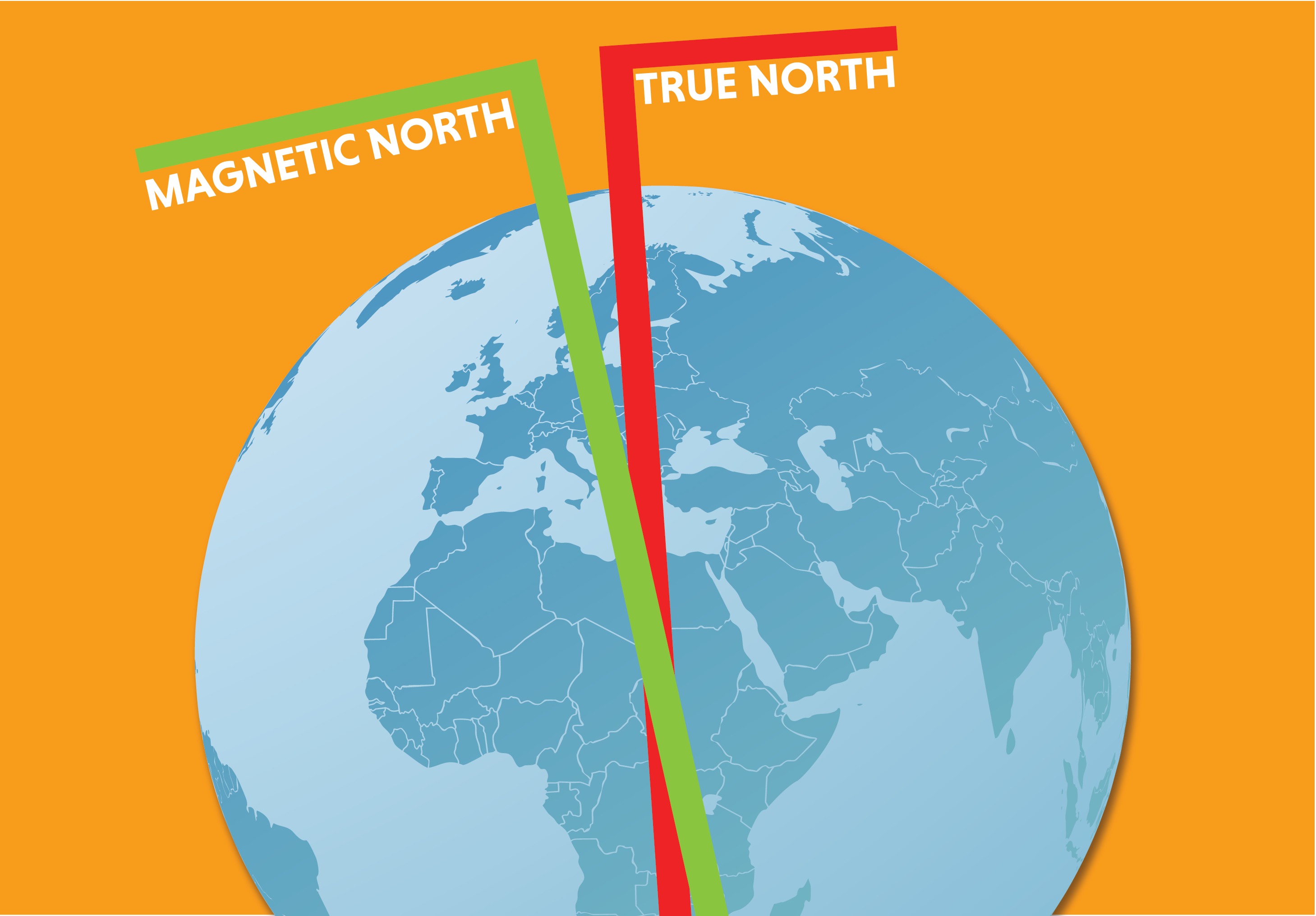 When it comes to which one to use, the two primary models are going to be the IGRF and WMM series.  NOAA has a very succinct description of the differences:

“The World Magnetic Model (WMM) and the International Geomagnetic Reference Field (IGRF) are estimated from the most recent data and are of comparable quality. The differences between IGRF and WMM are within expected model inaccuracy. The WMM is a predictive-only model and is valid for the current epoch (2020.0 to 2025.0). The IGRF is retrospectively updated and the latest update, IGRF-12 is valid for the years 1900.0 – 2020.0. While IGRF is produced by the voluntary research of the scientific community under the banner of the International Association of Geomagnetism and Aeronomy (IAGA), the WMM is produced by NCEI and the British Geological Survey (BGS) for the US and UK defense agencies with guaranteed quality, user support, and updates. For the U.S. Department of Defense, the U.K. Ministry of Defence, the North Atlantic Treaty Organization (NATO), the International Hydrographic Organization (IHO) and the Federal Aviation Administration (FAA) the standard is WMM. For other users, the choice between WMM and IGRF is arbitrary.”

The last and possibly most interesting model in the Geographic Calculator is the model known as “gufm1” which is an historical model going back 400 years.  It was assembled from various maritime reports over that time span and put together in one very complex model.  For further reading on this unique model see: https://royalsocietypublishing.org/doi/pdf/10.1098/rsta.2000.0569

There are issues with data consistency and accuracy of measurements due to technology and precision at times, but it can provide a helpful context in the realms of historical research.  It’s definitely not something the average user will need but it’s there if you do, and a fascinating read on how exactly it was all put together.

Hopefully, this begins to shed some light on a rather technical aspect of the Geographic Calculator.  If you are interested in going deeper, there is certainly a lot of extended reading you can do if magnetic models are something you need to utilize in your work. The NOAA FAQ page linked above is a great start for expanding your knowledge and the science behind these is fascinating reading. As with anything in geodetics, there’s always more to go into, but I hope this at least helps get you pointed in the right direction, pun intended.