Is A Pixel As Good As A Point? Exploring Global Mapper’s Raster Processing Functionality

There is a prevailing train of thought among certain GIS practitioners that raster data is dumb data, and that it serves the singular purpose of providing a visual reference for the real work of GIS, which is, in their opinion, squarely in the realm of vector data. While it could be argued that vector data offers more flexibility in data creation, editing, visualization, and analysis, and that it provides an altogether more interactive mapping experience, there is potentially as much intelligence in a pixel as there is in a point.

What is Raster Data?

According to Wikipedia, the term raster is a derivative of the Latin word rastrum, which means rake, and was first applied to the process of rendering a digital image by projecting (or raking) parallel lines on a cathode ray tube. By association, the term was ultimately applied to the resulting array of picture elements or pixels, as they became known.

Each pixel in a raster layer stores a quantified or measured numeric value. In the case of a conventional raster basemap, such as an aerial image, this value represents a specific single color. However, there is no limit to the type of data that a pixel value can represent. For instance, a raster density layer or heat map is comprised of pixels containing the aggregate point density for the area defined by the pixel. A common use for this type of data storage method is for elevation data, which offers countless opportunities for raster-based terrain analysis. While some of the tools used to edit raster image data can also be applied to raster format terrain data, the processing of terrain will be covered in greater detail in a future article.

When working with raster data, it is important to consider the size of each pixel. The pixel size, measured in ground units, can be found in the layer metadata and is a reflection of the resolution of the data. Small pixels will offer more detail but at the cost of increased file size and slower processing speed, while larger pixels often display a granular texture and are more suitable for small-scale, wide-area use. In either case, the pixel value is not representative of a specific point but is applied over the full extent of the area represented by each pixel. 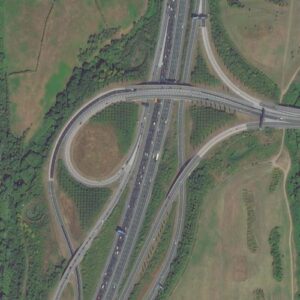 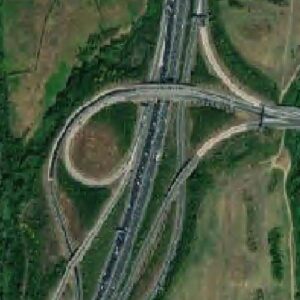 Global Mapper offers a wide array of tools for creating, editing, visualizing, and analyzing raster data, and to illustrate these capabilities, we explore some of the highlights.

As well as offering support for dozens of raster file formats, Global Mapper’s online data streaming service provides convenient access to a wide variety of free raster data, most of which can be saved locally for offline use. When working with imagery or other raster files that lack the necessary geographic reference information, a powerful Image Rectification tool provides the means to assign coordinates to recognizable points in the image. This can be achieved by concurrently tagging the corresponding location in an existing map layer or by manually entering the coordinate values. Ultimately, this process generates a geographically referenced raster layer that can be analyzed and processed like any raster data. 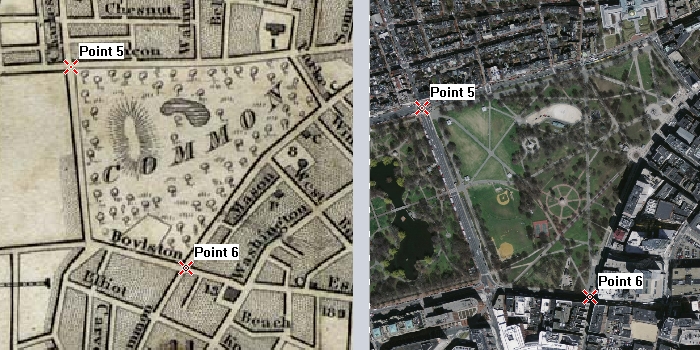 Control points added to an historical map of Boston as part of the image rectification process.

Contained in the Raster Options dialog box for a selected raster layer are numerous settings that can be used to adjust its display. Among the options are transparency, either assigned to selected colors or across the entire image, contrast, color grade, and color intensity.

Also available in the Raster Options dialog box is a feathering tool, which provides a simple way to smooth the transition between overlapping imagery layers. This effectively addresses issues that often arise when a hard border is created between images of different generations or resolutions. 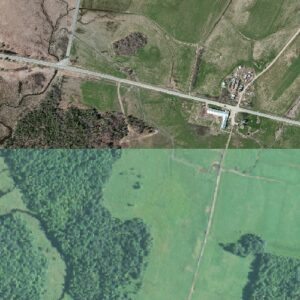 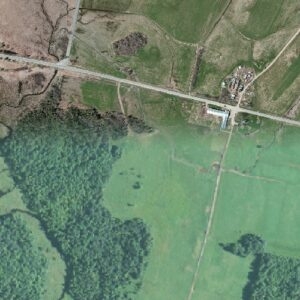 In most situations, raster data is opaque, and therefore, when working with two overlapping raster layers, only one can be displayed at a time. Global Mapper’s raster blending functionality merges two layers together by applying certain characteristics from the underlying layer to the one sitting on top. Several options, including Multiply, Hard Light, and Screen, control how the overlapping pixels interact.

One of Global Mapper’s most powerful image modification tools is pan-sharpening. This procedure creates a high-resolution color image from a relatively low-resolution multispectral layer combined with higher resolution panchromatic imagery. 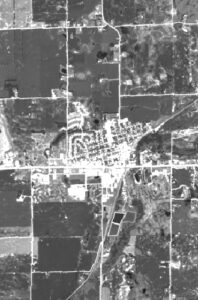 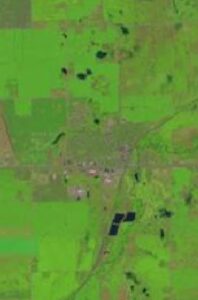 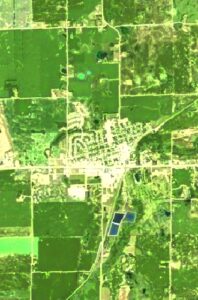 The higher resolution panchromatic image on the left is used to sharpen the color image to produce the pan-sharpened image on the right.

Global Mapper provides numerous tools for altering the geographic extent of raster layers. The Cropping tool is used to define the extent of an area of interest based on a selected vector polygon or the bounding coordinates for an area. The pixels outside of the cropped area are rendered transparent and are not considered in any analysis or export procedures. 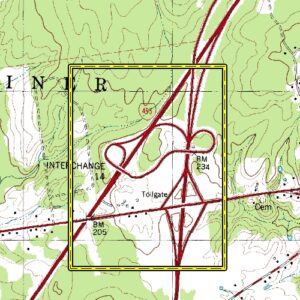 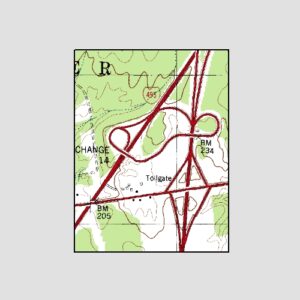 Cropping a portion of a topographic map using a selected polygon.

Tiling allows large raster layers to be broken down into a series of more manageable files during the export process. The extent and size of the tiles can be applied automatically based on settings assigned when exporting the data, or they can be manually defined based on an array of selected vector polygons.

The action of Mosaicking raster layers in Global Mapper requires no action; it happens automatically. When analyzing imagery or exporting multiple image layers, they are effectively merged into one layer.

Depending on the nature of the data, a raster layer can be used as the basis for thematic mapping, with a legend describing the characteristic represented by each pixel color value. This process is derived from the fact that the requisite palette image contains a limited number of indexed colors, each with an accompanying preconfigured description, and it offers an alternative to vector-based thematic mapping. 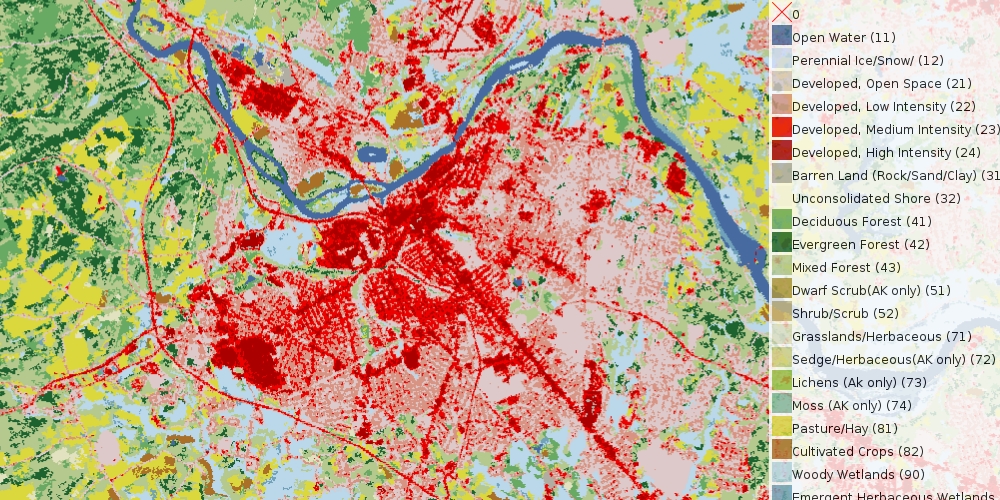 As mentioned during the introduction to this article, each pixel in a raster layer contains a numeric value. This number can be used in a mathematical calculation when compared with the corresponding value in an overlapping layer or in a separate band within the same layer. Global Mapper’s Raster Calculation function includes numerous preformatted formulas, including Normalized Difference Vegetation Index (NDVI), which uses the near-infrared and red bands to create a new raster layer within which each pixel contains a calculated value representing the degree of greenness or photosynthetic activity in vegetation. The Raster Calculator can also be used to create a custom formula based on the unique per-pixel values within any raster layer. 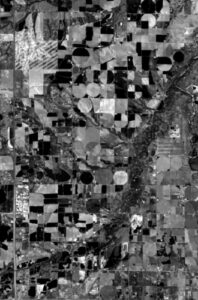 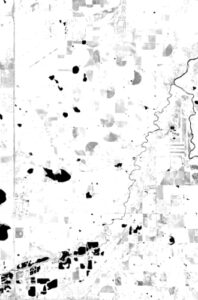 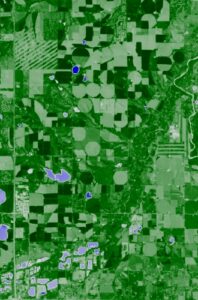 The isolated red band on the left and NIR band in the middle are used to calculate the NDVI grid on the right.

The function of Global Mapper’s Raster Reclassification tool is to update the per-pixel values in a raster layer based on a set of user-defined rules. This powerful tool has numerous applications, including consolidating palette indices, grouping numeric ranges, or simply changing certain colors in a palette. For example, different types of vegetation represented by unique index values in a land cover layer can be reclassified to a single index value showing a more concise view of vegetation distribution. 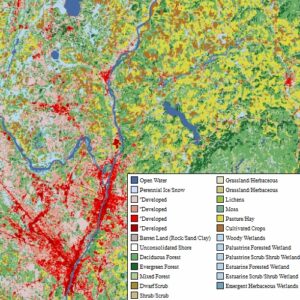 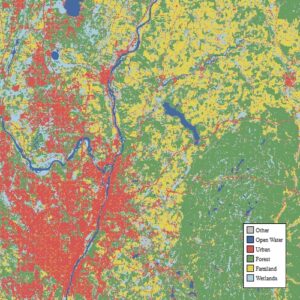 One of the least well-known raster processing tools in Global Mapper is arguably one of its most useful. Accessed from the layer menu, the Create Area Features from Equal Values tool generates polygons from collections of pixels that match a defined color range and is used to vectorize raster data. The possibilities with this tool are virtually limitless: It can be used to extract vector contours from a raster topographic map, building outlines from aerial imagery, areas of a recognizable vegetation type, bodies of water, and much more. 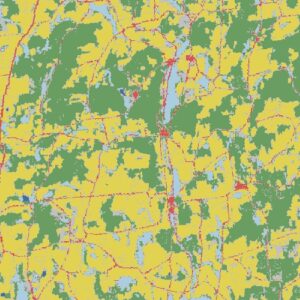 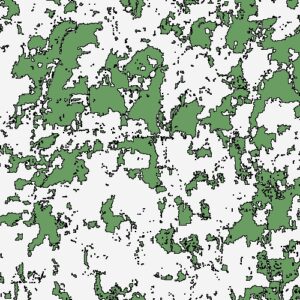 Just as we began this whistle-stop tour of Global Mapper’s raster processing capabilities by discussing the ways in which raster data can be loaded into the software, we wrap-up by addressing the myriad export options. Many raster processing workflows conclude with the creation of a new file or files, and for each of the dozens of exportable raster file formats, a plethora of settings and parameters are available to ensure that the Global Mapper-produced files behave as expected in their destination software. There are options to define the pixel size or resolution, the geographic extent, the number and size of tiles, the band setup, the degree of image resampling, and much more.

If a raster workflow is routine, pre-defined, and recurring, Global Mapper’s Batch Convert/Reproject or scripting options may provide a viable alternative to manually importing, processing, and exporting individual files. These tools can automate workflows to improve efficiency and productivity.

So let’s get right to the point, the analytical value of raster data is often understated but as we have learned, there are numerous tools in Global Mapper for exploiting and utilizing the inherent intelligence in a raster layer, beyond simply loading it as a basemap.

If you are new to Global Mapper and would like to explore this and other features and functions of the software, you can download a free evaluation copy. If you have any questions, don’t hesitate to get in touch.